Blockchain and cryptocurrency technologies are rapidly expanding throughout the world – and with that rapid expansion has come a growing interest in IP protection for blockchain and cryptocurrency inventions. USPTO statistics confirm blockchain’s ascendance. As of July 2020, roughly 7,600 applications containing the word “blockchain” had been filed, up from only 37 in 2014 (see Figure 1).  Many of the applicants are large, well-known companies (see Figure 2).

Below, we answer some introductory questions on blockchain to get started.

A blockchain is a type of large database called a distributed ledger system wherein collections of data (such as transaction records) are stored in “blocks” that are chained together using cryptography such that they cannot be changed later. A blockchain is distributed among a network of processing nodes (described below), where each node stores a partial or full copy of the blockchain.

Figure 3 shows a simplified diagram of an example of a blockchain. Block 102 records transactions that occurred at the time the block was formed. The header of Block 102 contains information the block itself, e.g., a timestamp and a cryptographic summary of the transactions. In addition, the Block 102 header includes a cryptographic hash of Block 101’s block header. This hash of the prior block header links Block 102 to Block 101. In addition, because each block’s header includes a summary of the transaction records contained in the block any attempt to fraudulently alter the transactions contained in a block (e.g., Block 101) will be readily discoverable because the altered block will no longer be linked with subsequent blocks.  That is, if transactions in Block 101 are altered the alteration would be discoverable in either its own header because the transaction summary contained therein would not accurately match the altered transactions, or, if the header of Block 101 were also altered, in the header of Block 102 because the hashed version of the true Block 101 header will not match a hashed version of the altered Block 101 header. Ultimately, an attempt to alter any transaction in a blockchain can only be done successfully by also re-computing every subsequent block.  This is impractical because of the amount of mathematical computation required in a short time frame.[1] 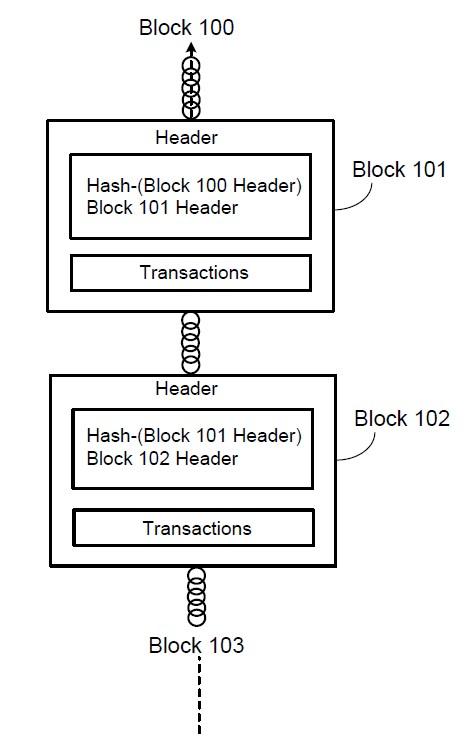 When a user (“A”) wants to initiate a transaction with another user (“B”), they send a message to the network stating, for example, “A sends five bitcoins to B.” Each node will then reference the existing chain of transactions to confirm that A has the necessary funds to transfer to B (see Figure 4). If a sufficient number of the nodes in the network reach a consensus that A has the necessary funds based on the copy of the blockchain available to them, the nodes will add the transaction record to the current block. (see Figure 5).  User A’s five bitcoins are not technically sent from user A’s smartphone to user B’s smartphone, rather new transaction added to the Bitcoin blockchain records the transfer and future references to the Bitcoin blockchain will show that user B owns five additional bitcoins and A has five fewer bitcoins. 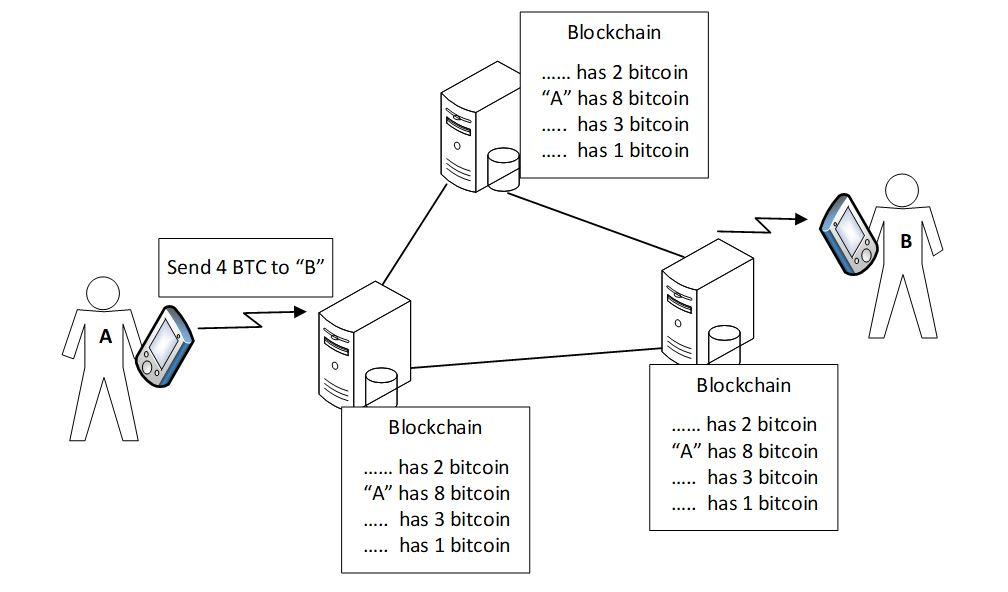 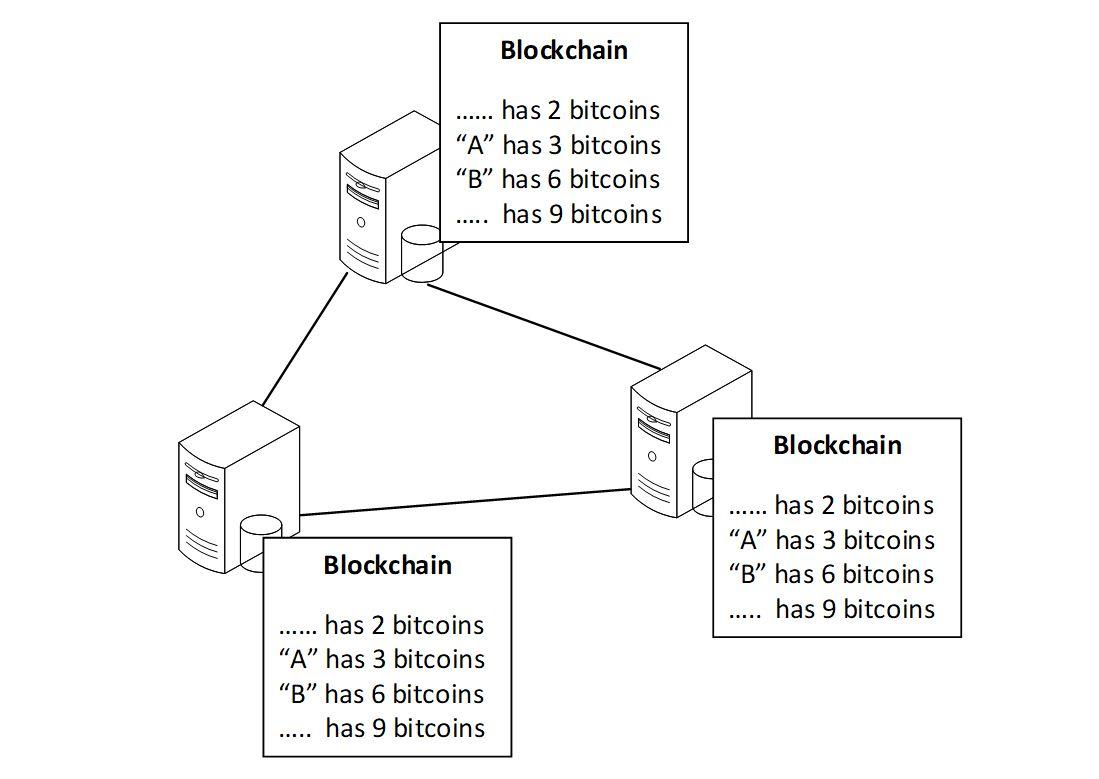 The principal advantage of blockchain over traditional centralized ledgers, such as those used by banks, is that distributed ledgers are generally more secure from attacks that would otherwise be made against a central system. Copies of the blockchain are stored across thousands of nodes that must reach a consensus before completing a transaction, mitigating the risk of a central point of failure. For example, in cryptocurrency systems that use “mining” (described in more detail below), a hacker would have to attack a large number of the nodes in the system (typically greater than 50% of all nodes in operation) to successfully insert a fraudulent transaction into the blockchain. Blockchain networks like the one underlying Bitcoin have grown so large that this type of attack is virtually infeasible.  According to bitnodes.io there are over 10,000 active nodes on the Bitcoin network.

Mining is a technique used by many (but not all) popular cryptocurrency systems, including Bitcoin. At a high level, the mining process validates transactions in the blockchain through a distributed network of nodes.  An award is given to the node who first succeeds at successfully validating the transaction.  – the “miners.” That is, an individual can earn rewards (e.g., bitcoins) by volunteering to leverage their personal computing units as a system administrator to solve complex mathematical problems on the blockchain network.  In general, mining is the process of gathering pending transactions (e.g., between user A and user B) into a block and adding the block to the blockchain.  Miners compete to solve a complex cryptographic problem that will add the pending transactions to the blockchain. The first mining computer to solve the problem broadcasts its results to the rest of the mining network to have the block added to the blockchain by the other nodes.  The other nodes validate the block by confirming that all the transactions in the block are accurate and the miner’s solution to the cryptographic problem is correct.  For instance, a block is valid if the network computers confirm that user A had not previously spent the funds that he attempted to send to user B.  The block is accepted by the network when enough of the nodes begin working on a subsequent block of transactions based on that block.[4]

The mining technique used by Bitcoin requires a large amount of computer processing which is electricity-intensive. Alternatives to Bitcoin-style mining have been developed and implemented in newer blockchain systems, though the type of mining described above is still the most common technique.

While blockchain is most commonly associated with cryptocurrencies and the financial industry, its applications extend well beyond that. For example, experts in the medical field believe that blockchain could facilitate drug development by making the results of clinical trials more widely accessible.[5]  In the legal world, it could streamline the recording of interests in real property and more clearly and immutably establish exactly when and between whom property interests change hands.[6] And in retail, it could optimize supply chain management by, for example, reducing the number of counterfeit goods on the market and improving food safety.[7]

As with all software-based inventions, obtaining a patent on blockchain technology can be a tricky proposition. This type of patent prosecution requires an attorney with deep technical knowledge, expert drafting skills, and considerable experience handling rejections under 35 U.S.C. § 101 before a wide range of examiners at the USPTO. Fish brings together an elite team of attorneys who possess each of these characteristics and more, imbuing our software patent practice with the winning combination of legal knowledge, technical skill, and USPTO experience necessary to safeguard our clients’ most valuable assets. For more information about blockchain patents and our industry-leading software patent practice, contact your Fish attorney or email us at [email protected].

[1] Such an alteration is theoretically possible by carrying out a “51% attack” on the blockchain and the blockchain network.  We may dive into this topic in a future blog post.

[3] Note that it is common to capitalize the “B” in Bitcoin when referring to the Bitcoin network and blockchain and to use a lowercase “b” when referring to the bitcoin cryptocurrency. [see https://medium.com/@blockchain/drawing-the-distinction-between-the-uppercase-b-and-lowercase-b-in-bitcoin-12bb0d01a65e#:~:text=Bitcoin%20with%20a%20capital%20%E2%80%9CB,about%20it%20in%20general%20terms.]