Bitcoin Falls After Rallying in Weekend to Record Above $61,000 – Yahoo Finance 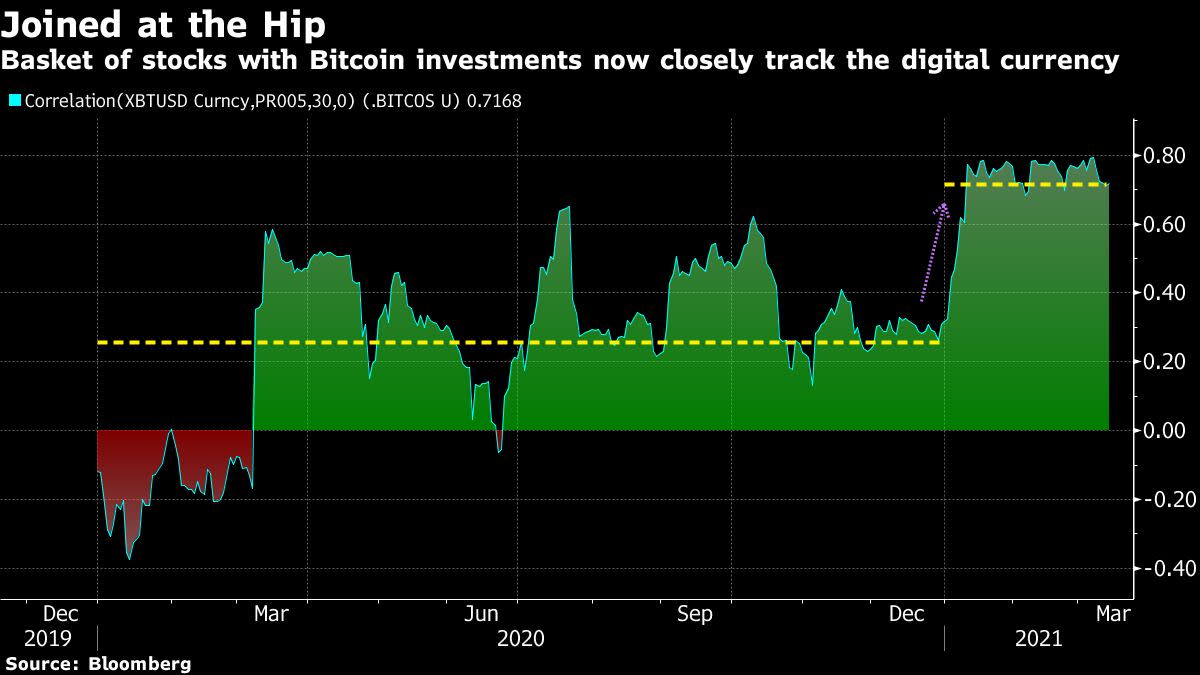 (Bloomberg) — Bitcoin dropped by as much as 9.2% on Monday as traders eased up on stimulus-fueled bets that had powered the digital token to a fresh record over the weekend.

The largest cryptocurrency was trading at $56,325 as of 10:56 a.m. in London, after topping out at $61,742 on Saturday. Bitcoin reached its latest all-time high on optimism that some of the pandemic relief payments in the U.S. will end up chasing the digital token’s towering rally.

“This looks like a normal consolidation after a big rally,” said Nick Jones, chief executive officer at crypto wallet and exchange Zumo. “We believe that gains seen by Bitcoin and many other cryptocurrencies this year will be sustained although as always with crypto, it won’t be a steady curve.”

Advances in crypto-exposed stocks — including Riot Blockchain Inc., Marathon Digital Holdings Inc. and MicroStrategy Inc. — pared or reversed as the token gave up its weekend surge.

The lively debate over the scope for more stimulus-fueled gains, and whether it’s even possible to work out a long-term value for Bitcoin, continues apace. The token has climbed more than 1,000% in the past year, pushed higher by signs of increased institutional and corporate interest alongside the usual speculative demand.

Crypto has seen “some good flow, with traders front running U.S. stimulus checks,” Chris Weston, head of research at Pepperstone Group Ltd., wrote in a note, adding Bitcoin needs to stay above the previous high of just over $58,000 to bolster confidence in a “new bull leg.”

Jeffrey Halley, senior market analyst at Oanda Asia Pacific Pte, and Matt Maley of Miller Tabak + Co both see the potential for further gains based on some recent chart patterns. Bitcoin could rally toward $75,000 “very quickly,” Maley said. Bloomberg Intelligence strategist Mike McGlone has said $100,000 could be the next threshold.

The fortunes of a range of companies are increasingly tied to the cryptocurrency, from listed Bitcoin miners and brokers to firms that have invested in the token.

For instance, the correlation coefficient between Bitcoin and an equal-weighted basket of five stocks which have announced investments in the digital currency — Tesla Inc., MicroStrategy Inc., Square Inc., Meitu Inc. and Aker ASA — has surged to an average of 0.72 this year from 0.26 in 2020.

Crypto watchers are trying to gauge the outlook. Greg Waisman, the co-founder of the global payment network Mercuryo, said in emailed comments Sunday there is some recent “whale activity,” where coins from 2013 were being moved for the first time. Such events, he said, usually lead to selloffs.