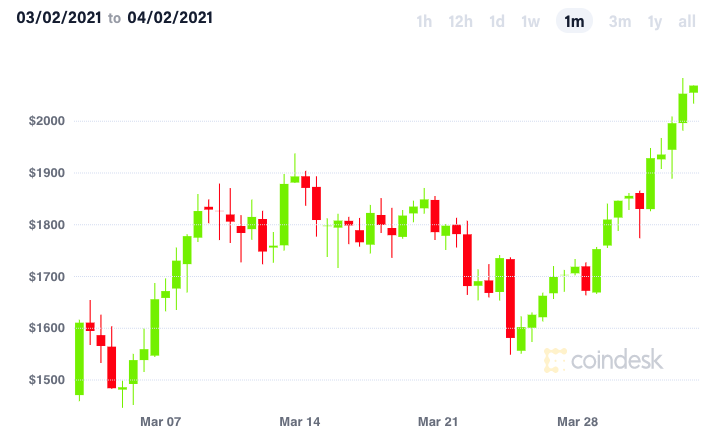 Bitcoin was little changed, after briefly pushing above $60,000 earlier Friday but quickly finding selling pressure that brought the largest cryptocurrency’s price back down to about $58,900 as of press time.

“This could be an interesting weekend for bitcoin as much of the institutional money is expected to be dormant,” said Edward Moya, senior market analyst for the foreign-exchange broker Oanda. “Weekend volatility has been somewhat of a story this year, so many crypto watchers will look to see if any whales try to take advantage of illiquid conditions.”

Though bitcoin has roughly doubled in price this year, the gains have stalled around $60,000, despite continuing signs of growing mainstream adoption, including lofty price predictions from Wall Street firms including JPMorgan Chase, the largest U.S. bank, and the brokerage firm BTIG.

JPMorgan issued a note Thursday arguing that bitcoin could fetch a long-term price of $130,000 if its volatility continues to decline. According to the bank, Bitcoin is becoming more appealing to institutions seeking low-correlation assets that diversify portfolios, Business Insider reported Thursday.

BTIG issued a “buy” rating on shares of Michael Saylor’s MicroStrategy, the business intelligence firm and bitcoin storehouse. The firm’s analysts said their valuation was partly based on an assumption that BTC could rise to $95,000 by the end of 2022.

Bitcoin has been increasingly embraced by big investors as potential hedge against inflation, in the face of trillions of dollars of stimulus from governments and central banks around the world, attempting to jolt their coronavirus-racked economies.

Greg Cipolaro, head of research for the digital-asset manager NYDIG, wrote Friday in a weekly newsletter that he sees bitcoin “as an alternative to existing economic systems, which is why we think it has elicited so much interest, especially in the current easy money era.”

Related: The Future of Bitcoin and Crypto Is in Renegades and Malcontents

Ether jumped Friday to a new all-time high as the second-biggest cryptocurrency extended its winning streak to five days.

The native cryptocurrency of the Ethereum blockchain, ether traded as high as $2,097 around 20:41 UTC, according to CoinDesk 20 data.

The price has rallied 24% this week in the wake of Visa’s decision to facilitate crypto-based settlements on the Ethereum network.

Billionaire investor Mark Cuban, who hosts the CNBC show “Shark Tank” and owns the Dallas Mavericks professional basketball team, said on a recent podcast episode that he’s bullish on cryptocurrencies including bitcoin, but that Ethereum is “the closest we have to a true currency.”