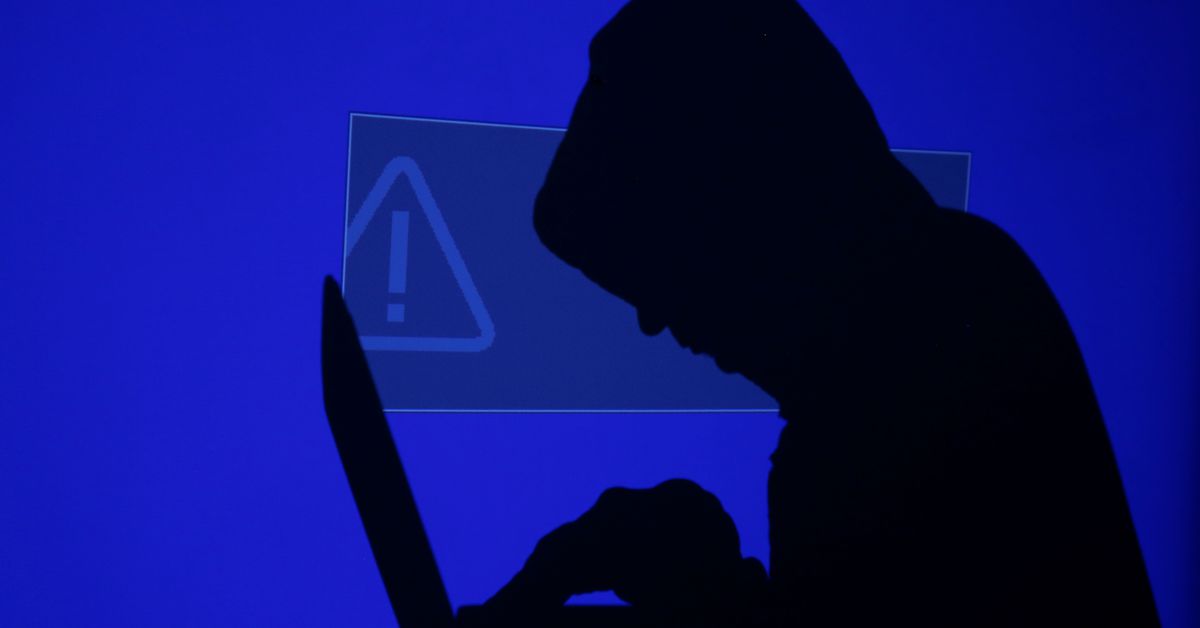 A hooded man holds a laptop computer as blue screen with an exclamation mark is projected on him in this illustration picture taken on May 13, 2017. REUTERS/Kacper Pempel/Illustration

Government and industry officials confronting an epidemic of ransomware, where hackers freeze the computers of a target and demand a payoff, are zeroing in on cryptocurrency regulation as the key to combating the scourge, sources familiar with the work of a public-private task force said.

In a report on Thursday, the panel of experts is expected to call for far more aggressive tracking of bitcoin and other cryptocurrencies. While those have won greater acceptance among investors over the past year, they remain the lifeblood of ransomware operators and other criminals who face little risk of prosecution in much of the world.

Ransomware gangs collected almost $350 million last year, up threefold from 2019, two members of the task force wrote this week. Companies, government agencies, hospitals and school systems are among the victims of ransomware groups, some of which U.S. officials say have friendly relations with nation-states including North Korea and Russia.

“There’s a lot more that can be done to constrain the abuse of these pretty amazing technologies,” said Philip Reiner, chief executive of the Institute for Security and Technology, who led the Ransomware Task Force. He declined to comment on the report before its release.

Just a week ago, the U.S. Department of Justice established a government group on ransomware. Central bank regulators and financial crime investigators worldwide are also debating if and how cryptocurrencies should be regulated.

The new rules proposed by the public-private panel, some of which would need Congressional action, are mostly aimed at piercing the anonymity of cryptocurrency transactions, the sources said. If implemented, they could temper enthusiasm among those who see the cryptocurrencies as a refuge from national monetary policies and government oversight of individuals’ financial activities, having surged past $1 trillion in total capitalization.

The task force included representatives from the FBI and the United States Secret Service as well as major tech and security companies. It will recommend steps such as extending “know-your-customer” regulations to currency exchanges; imposing tougher licensing requirements for those processing cryptocurrency; and extending money-laundering rules to facilities such as kiosks for converting currency.

It also calls for the creation of a special team of experts within the Justice Department to facilitate seizures of cryptocurrency, a process currently fraught with logistical and legal challenges.

Some of the ideas echo those proposed by the Financial Crimes Enforcement Network, which would expand disclosure rules for transactions worth more than $10,000.

Federal investigators said a proposal to register accounts would be especially helpful for identifying drug smugglers, human traffickers and terrorists as well as ransomware groups.

“That would be huge,” said a senior Homeland Security Official, who spoke on condition of anonymity to discuss emerging policy proposals. “This is a world that was created exactly to be anonymous, but at some point, you have to give up something to make sure everyone’s safe.”

Governments are already using the blockchain ledger that documents all bitcoin transactions to bring some charges. Last week, authorities arrested a man in Los Angeles and accused him of laundering more than $300 million through a service that combines transactions from multiple cryptocurrency wallets to obscure who is paying whom.

Records from the U.S. Marshals Service show that more than $150 million in crypto assets were seized last year and offered to the public at auction. Last week, the Marshals Service signed a $4.5 million deal with BitGo, a California-based exchange, to hold and sell more forfeited cryptocurrency.

But many of the exchanges, which conduct the critical operation of turning cryptocurrency into dollars or other widely accepted currencies, are in countries outside the reach of U.S. regulators.

The Institute for Security and Technology’s Reiner said that international cooperation will be critical, and that pressure could be brought by allies with similar regulations, which could help push exchanges into countries where Americans will hesitate to send their funds.

“However much crypto markets think they have created their own networks, they still rely on existing financial markets,” Reiner said.