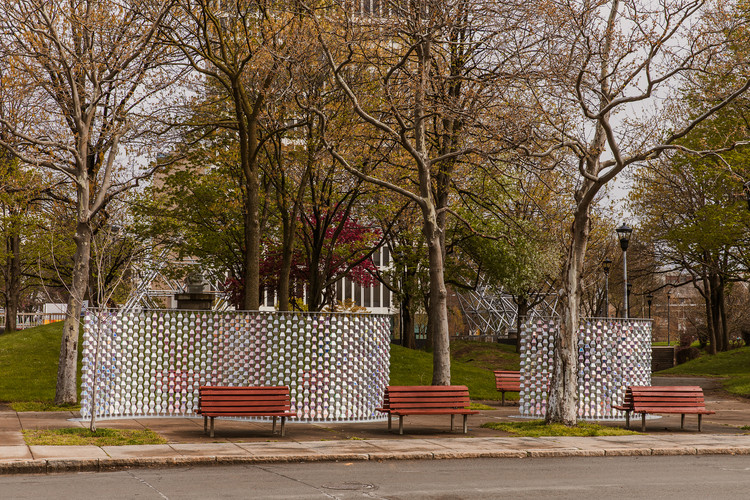 Text description provided by the architects. Ripple is a permanent public installation created by The Urban Conga in Rochester, NY. It was designed with the community through a series of participatory design workshops to serve as an ever-changing landmark that responds to the people, the landscape, and the interactions between them.

The intervention was designed for the community by the community to act as a catalyst for breaking down social barriers and connecting people within the public realm through sparking moments of open-ended play. Its playful gesture becomes an engaging moment that gets people to stop and interact not only with the work but also with each other. The intervention becomes less about the work itself and more about the relationships, conversations, and connections it can spark within the space. It showcases the value of play in everyday spaces and its impact on creating more social, healthier, safer, and inclusive cities.

Ripple is a part of an ecosystem of playable interventions being implemented by the City of Rochester, The Strong Museum of Play, KaBOOM, and Common Ground Health that connects the Genesee river within the city center of Rochester, NY. The design of Ripple was inspired by the flowing movement of the Genesee River, the main artery running through the center of the city and an integral part of the city’s history. Like the river, Ripple has a flowing motion that allows for passive interaction with the piece while walking on the pedestrian pathway into Martin Luther King Jr. Park.

Its unique flowing form creates opportunities for a variety of social interactions to happen within the space. The iridescence of the piece mimics the effects of rippling water, and as you walk by the piece, the reflections and refractions of the surrounding environment make it feel as if it is alive and moving. The piece adapts with the changing seasons and surrounding context creating new experiences and memories each time someone passes by.

This effect was created through each unit containing a reflective dichroic film that changes color based on the angle light hits its surface and the user’s manipulation of the reflection. The piece contains 1200 of these units, which were influenced by the form and clustering of the lilac, Rochester’s well-known flower. Each of these units acts as a pixel that individuals can rotate to become a message board for the city. It becomes a timeless open-ended playable platform for the community to put their own individual identity onto the work and space.