Bitcoin Is Plunging. Here’s What You Need To Know – NPR 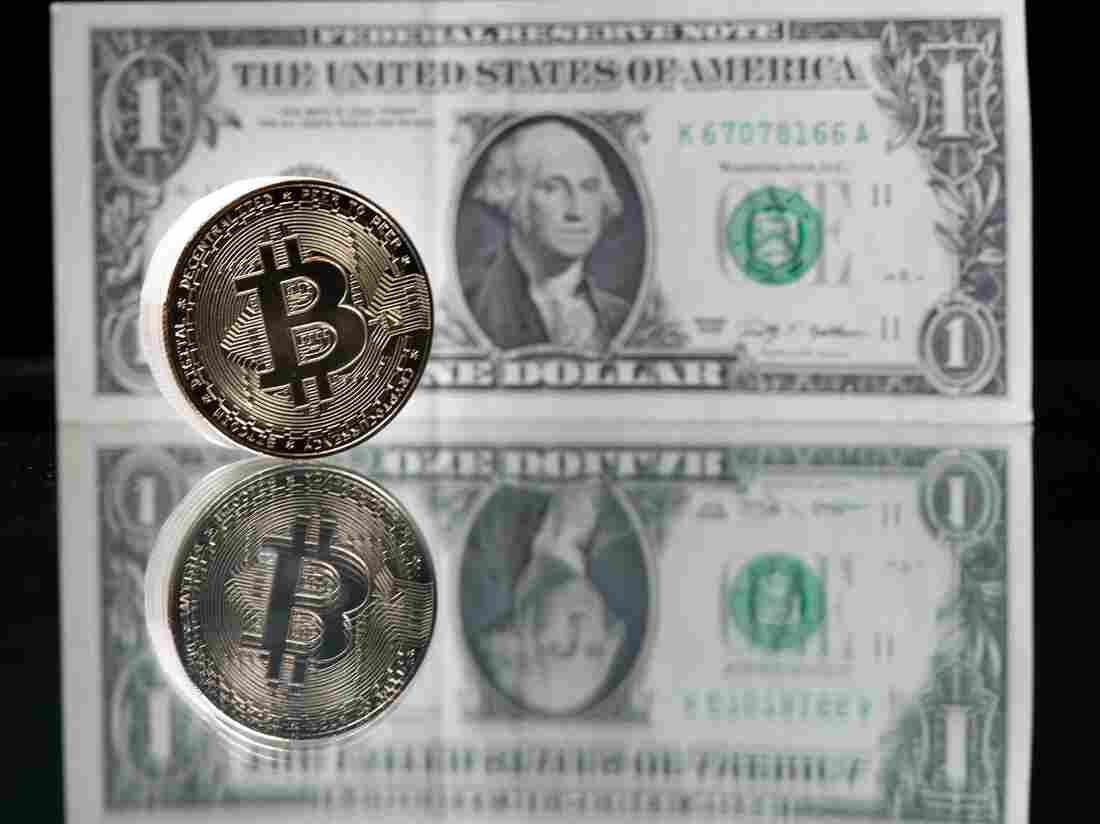 A physical imitation of the Bitcoin cryptocurrency is pictured with a $1 bank note. Cryptocurrencies are plunging over a range of factors, including the spillover impact from falling stock markets and fears about increased regulations. Martin Bureau/AFP via Getty Images hide caption

A physical imitation of the Bitcoin cryptocurrency is pictured with a $1 bank note. Cryptocurrencies are plunging over a range of factors, including the spillover impact from falling stock markets and fears about increased regulations.

It’s been a rocky ride for investors in cryptocurrencies lately. Bitcoin, the best known of these virtual assets, is down nearly 40% since hitting a record of just under $65,000 in mid-April.

There are a handful of reasons why the value of digital currencies is plunging.

There is the sell-off we are seeing on Wall Street over inflation fears that’s spilling over. There is also concern that regulators around the world, including in the United States, will crack down on these virtual assets. And then there’s Tesla CEO Elon Musk, whose comments continue to move cryptocurrencies such as Bitcoin.

But perhaps the biggest reason is the simplest of them all: These are risky and volatile investments, and that’s how they are behaving.

Remember, Bitcoin is a young asset. It has only been around for 13 years, and you used to be able to buy it for a few bucks.

Weren’t we just talking about a boom in Bitcoin?

Yes, until recently, we were. During the pandemic, novice and traditional investors started buying digital currencies in droves.

The same excitement that led amateur traders in Robinhood’s app to buy GameStop’s shares fueled the frenzy over cryptocurrencies.

For months, people were stuck at home, with time on their hands. And for a while at least, it seemed like it was a sure thing: Prices kept going up and up.

Over the last year, many large institutional investors also started to add cryptocurrencies to their portfolios, and that gave them some added legitimacy.

According to Liz Ann Sonders, chief investment strategist at Charles Schwab, it was hard not to notice how much money was being funneled into the digital currencies.

“It just feeds on itself,” she says.

As it turns out, cryptocurrencies are not insulated from what has been a wider sell-off in markets.

The stock market has been hit hard since last week as a surge in consumer prices sparked concerns about inflation.

Investors are worried that prices will continue to rise and that the Federal Reserve may raise interest rates sooner than expected.

But wasn’t Bitcoin supposed to be a hedge against inflation?

That was the argument by Bitcoin enthusiasts, though many analysts do not think that’s actually the case.

Moya from OANDA notes that cryptocurrencies remain a speculative asset, and when there is a market sell-off, Bitcoin and fellow virtual assets will drop in value, too.

In that sense, Moya argues, it’s not like gold, widely seen as the ultimate hedge against inflation.

Many virtual currency adherents are deeply skeptical of the role governments and central banks play in the financial system. The irony is that as investments in Bitcoin and other assets become more widespread, they will attract more regulatory scrutiny.

The Treasury Department on Thursday announced that it would require businesses that undertake transfers of at least $10,000 worth of cryptocurrencies to report those to the IRS.

Gary Gensler, the new chairman of the Securities and Exchange Commission, has made it clear digital currencies are something his agency will focus on.

And this week, China’s central bank banned financial institutions from taking part in any transactions made up of cryptocurrencies.

And what about Musk?

Musk has become closely associated with Bitcoin and other virtual currencies.

For example, the billionaire promoted a virtual currency called Dogecoin, which started off as a joke. That sparked a surge in prices, but the currency then crashed after Musk referred to it as a “hustle” when he hosted Saturday Night Live this month.

But Musk has been most closely associated with Bitcoin.

“He has been the biggest cheerleader for Bitcoin,” Moya says. “The market is still sensitive to these influencers.”

Musk sparked a rally in Bitcoin after he announced in February that his car company, Tesla, had bought $1.5 billion worth of Bitcoin and that it would accept payments in the virtual asset.

But Musk stunned investors by announcing this month that Tesla would stop accepting payments in Bitcoin because of concerns about the impact on the environment.

In so doing, he brought attention to something that has dogged digital currencies since their inception — that they require a lot of energy to mine.

So what about those environmental concerns?

The environmental impact is big.

That requires enormous power, and it’s often done in countries such as China that rely on dirtier energy sources like coal.

Researchers at the University of Cambridge in the United Kingdom, for example, estimated that mining for Bitcoin consumes more energy annually than the whole of Argentina.

Several of Bitcoin’s competitors see this as a way to differentiate themselves from the digital currency, and they are playing up their more environmentally friendly bona fides.

So finally, what’s the big takeaway?

A simple one: that cryptocurrencies such as Bitcoin are incredibly volatile investments.

Markets experienced this firsthand on Wednesday. In the morning, Bitcoin fell over 30%, only to turn around and surge more than 30% in the afternoon.

That’s why most analysts caution amateur investors against cryptocurrencies, though they say the assets can make sense if held as long-term investments or for professional investors.

“It’s too volatile for most investors,” Moya from OANDA says. “But I think for longer-term investors, depending on when you got in, you still might feel calm, confident in your investment.”