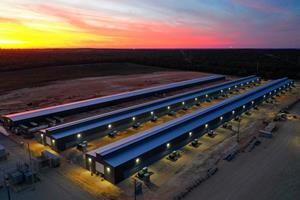 Castle Rock, CO 80104, May 26, 2021 (GLOBE NEWSWIRE) — Riot Blockchain, Inc. (NASDAQ: RIOT) (“Riot”, “Riot Blockchain” or the “Company”) today announced that it has completed its previously announced acquisition of Whinstone US (“Whinstone”) from Northern Data (XETRA: NB2).  The total consideration paid in the transaction was 11.8 million shares of Riot common stock and $80 million in cash, funded with cash on the balance sheet.

“The successful acquisition of Whinstone marks the most significant milestone in Riot’s history, and firmly establishes the Company as a leading Bitcoin mining platform,” said Jason Les, CEO of Riot.  “With Whinstone’s preeminent infrastructure and best-in-class construction, development, and operations organization, Riot is extremely well-positioned to increase the scale and scope of its operations.  We welcome the talented Whinstone employees to the Riot family, and I look forward to leading our combined team as we jointly execute upon the Company’s mission to become one of the most relevant and significant companies supporting the Bitcoin network and greater Bitcoin ecosystem.”

“We are incredibly proud of the Whinstone team and sincerely appreciative of the Rockdale community that has supported us since we first broke ground in early 2020,” said Chad Harris, CEO of Whinstone.  “We look forward to partnering with the Riot team to advance our pursuit of creating America’s leading Bitcoin mining company.”

Riot plans to immediately commence further development of additional facilities at Whinstone in order to rapidly bring the property to its current capacity of 750 MW.  With this capacity expansion, the Company’s intention is to send its future committed miner order deliveries to Whinstone, which will allow Riot to capture significant synergies, including lower direct energy costs and operational costs.

Riot will host a live conference call at 8:30 am ET on May 27, 2021 to discuss additional details about the transaction. Further details may be found at http://www.tinyurl.com/RiotIR. The presentation will also be available on the Riot website.

Riot Blockchain (NASDAQ: RIOT) focuses on mining Bitcoin and hosting Bitcoin mining equipment for clients. The Company is expanding and upgrading its mining operations by securing the most energy efficient miners currently available. Riot is headquartered in Castle Rock, Colorado, and the Company’s current mining facility operates out of Rockdale, TX. The Company also has mining equipment operating in upstate New York under a co-location hosting agreement with Coinmint. For more information, visit www.RiotBlockchain.com.