It has been a lively month for cryptocurrencies, between volatile markets and Elon Musk’s Dogecoin antics on Saturday Night Live. Amid it all, a small chorus of business leaders, current and former policymakers, and commentators have begun musing about banning technologies like Bitcoin altogether in the United States. This proposition arises for different reasons and in various degrees of seriousness. Taking such drastic action, however, would be imprudent and short-sighted.

There are numerous debates raging about whether Bitcoin is good, bad, or ugly. But the sweeping suggestion to outlaw Bitcoin raises three broader issues, regardless of one’s perspective on any given cryptocurrency.

First is the overarching principle of technology neutrality—that we should develop policies and laws that apply evenhandedly across technologies and time. For instance, if we say we do not like Bitcoin because it can be used by bad actors, would that position also apply neutrally to other financial technologies and instruments? The bad-actor scenario could also occur with a duffle bag filled with $100 bills. The US Treasury Department has printed about twelve billion $100 bills, 80 percent of which are in circulation outside the country. Additionally, would a Bitcoin ban apply equally to other digital assets that cost more than $30,000 (the current value of Bitcoin)—or $10,000 or even $1?

Second, we have to think through what a firm ban would actually mean for an asset that an estimated forty-six million Americans now own. Would the plan be to prosecute anyone who does not hand over their Bitcoin and threaten them with jail time? Criminalizing 14 percent of the US population for mere possession of encryption keys would pose a form of mass incarceration that is, among other things, antithetical to the current political consensus on criminal-justice reform. How many thousands of judicial proceedings would the confiscation of all those Bitcoin require? Would the federal government plan to reimburse citizens for the billions in dollars in property it confiscates? (By way of comparison, in the 1930s the US government ordered restrictions on certain uses of gold, which were the subject of intense litigation and were narrowly upheld by the Supreme Court. Notably, the right to own gold was restored in the 1970s.)

Third, democratic values must inform US policies around cryptocurrencies. Over the past week, Chinese Vice Premier Liu He initiated a “crack down on bitcoin mining and trading” and Iran imposed a hardline ban on mining. In response, a former senior Treasury Department official said that the United States “ought to follow China on this one and really clamp down on crypto.” But China’s record of clampdowns—both online and in the physical world—is not something the United States should blithely seek to emulate. Democratic nations do not unilaterally “clamp down” on things that some may dislike. We deliberate, promulgate regulations, and/or enact legislation. Moreover, the United States regularly and rightly criticizes other nations, particularly China, for clamping down on an open internet, which should give Americans serious pause about flirting with a categorical ban on a decentralized internet protocol.

Other commentators have made sweeping assertions like saying that the privacy features of some cryptocurrencies are mainly “useful for criminals.” That is plainly incorrect as a matter of law and history. The late US Supreme Court Justice Louis Brandeis famously extolled the importance of the right to privacy in the 19th and 20th centuries. Congress overwhelmingly passed a statute entitled the “Right to Financial Privacy Act” in 1978, and the Supreme Court has held that the right to privacy undergirds other important constitutional rights. Privacy is an enduring American value that applies to everything from the sanctity of our homes to the right to buy contraceptives.

The Colonial Pipeline hack has raised new questions about whether banning Bitcoin could help defuse the global ransomware problem, but ransomware predated the adoption of cryptocurrency. For example, in 1989 a large-scale ransomware attack against scientists required them to send a cashier’s check or money order to a P.O. box in Panama. People sometimes do bad things with paper cash, including using it for ransom payments. Rather than attempting to prohibit the latest medium of exchange, it would be better to step up corporate- and national-level cyber defenses. Crypto ransom payments are not totally untraceable either: An analytics company that works with law enforcement has already managed to start tracking the Colonial Pipeline payment. Try that with a pile of Benjamins.

Constructive conversations lie ahead about appropriately regulating digital currencies (plural). For instance, how do we incentivize the use of renewable energy for cryptocurrencies that are more electricity-intensive, protect consumers from excessive risk, and trace money launderers who take advantage of new technologies? These are legitimate issues that require careful consideration. What’s needed now is greater interagency coordination within the US government and clearer rules, rather than regulatory fiefdoms and piecemeal enforcement. But concrete progress is not going to start by waking up one day, fuming at the latest price of Bitcoin, and musing about a “clamp down.” That is more of a fever dream than serious policy, and it should subside soon enough as cooler heads prevail.

JP Schnapper-Casteras is a nonresident senior fellow at the Atlantic Council’s GeoEconomics Center and a practicing attorney. 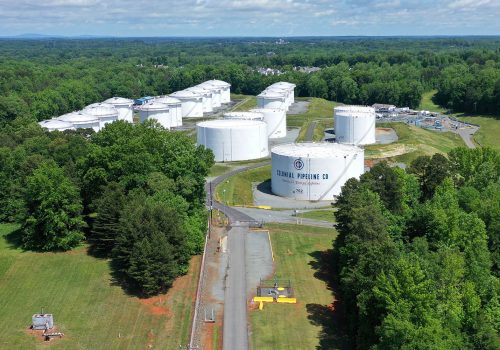 FAST THINKING: How to stop the next pipeline hack

The hack has been tied to an Eastern European (and possibly Russia-based) collective known as DarkSide and US President Joe Biden has said that Russia bears some responsibility for the hack, even though the attack does not appear to have been state-sponsored. How can companies fight back against this rising trend of ransomware attacks? What can the Biden administration do?

Tony Andrews | Twenty20U.S. homebuyers apparently aren't all that interested in paying their mortgages in cryptocurrencies like bitcoin.United Wholesale Mortgage,...