Bitcoin was flirting with its biggest monthly decline on record as May comes to an end.

Bitcoin, the largest cryptocurrency by market capitalization, was on track to close down 36% for May at $36,509 per coin. A finish below $34,885 would cement the cryptocurrency’s worst month on record. 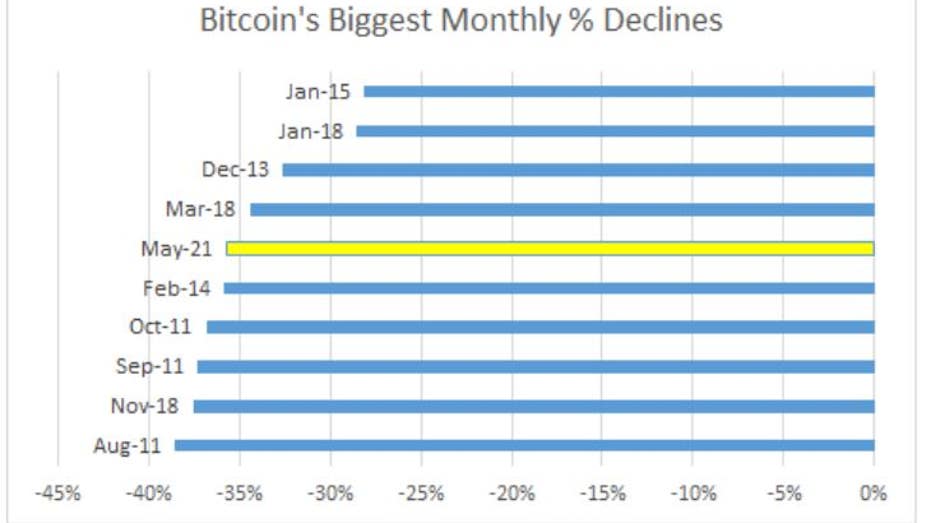 Bitcoin prices came under pressure in May amid concerns the cryptocurrency market could face increased scrutiny from regulators both in the U.S. and abroad.

Federal Reserve Chairman Jerome Powell this month floated the possibility that the central bank could create its own digital currency and was looking into ways to tighten regulation. The Internal Revenue Service said cryptocurrency transfers over $10,000 needed to be reported.

Meanwhile, Chinese regulators this month took a number of steps to limit the use of bitcoin and other cryptocurrencies. They announced plans to crack down on bitcoin mining and trading behavior and the country’s banking association warned its members to refrain from transacting in digital currencies. China is working on its own digital currency, the digital yuan.

Talk of increased regulation comes as Tesla Inc. this month reversed its policy to accept bitcoin as payment for its vehicles, citing concerns over the environmental impact of cryptocurrency mining.

Bitcoin in April hit a record high of more than $63,500 per coin, fueled by the decision of a number of U.S. companies to begin investing in the cryptocurrency as a way to diversify their cash.

Business intelligence software provider MicroStrategy Inc. has invested more than $2.2 billion in bitcoin while Tesla has parked about $1.5 billion in the cryptocurrency.