The Hourly View for LTC

At the moment, Litecoin’s price is up $0.8 (0.44%) from the hour prior. This is a reversal of the price action on the previous hour, in which price moved down. If you’re a trend trader, consider that the strongest clear trend on the hourly chart exists on the 100 hour timeframe. Most noteworthy in the world of moving averages on the hourly chart is that the 50 hour moving average has been crossed, with price now being above it. The moving averages on the hourly timeframe suggest a choppiness in price, as the 20, 50, 100 and 200 are all in a mixed alignment — meaning the trend across timeframes is inconsistent, indicating a potential opportunity for rangebound traders.

Cryptocurrency Litecoin Down More Than 3% Within 24 hours – Benzinga – Benzinga

The choppiness in the recent daily price action of Litecoin continues; to start today, it came in at a price of 182.94 US dollars, down 2.75% ($5.17) since the day prior. This move happened on lower volume, as yesterday’s volume was down 16.05% from the day before — and down 48.77% from the same day the week before. Out of the 7 instruments in the Top Cryptos asset class, Litecoin ended up ranking 5th for the day in terms of price change relative to the day prior. Let’s take a look at the daily price chart of Litecoin. 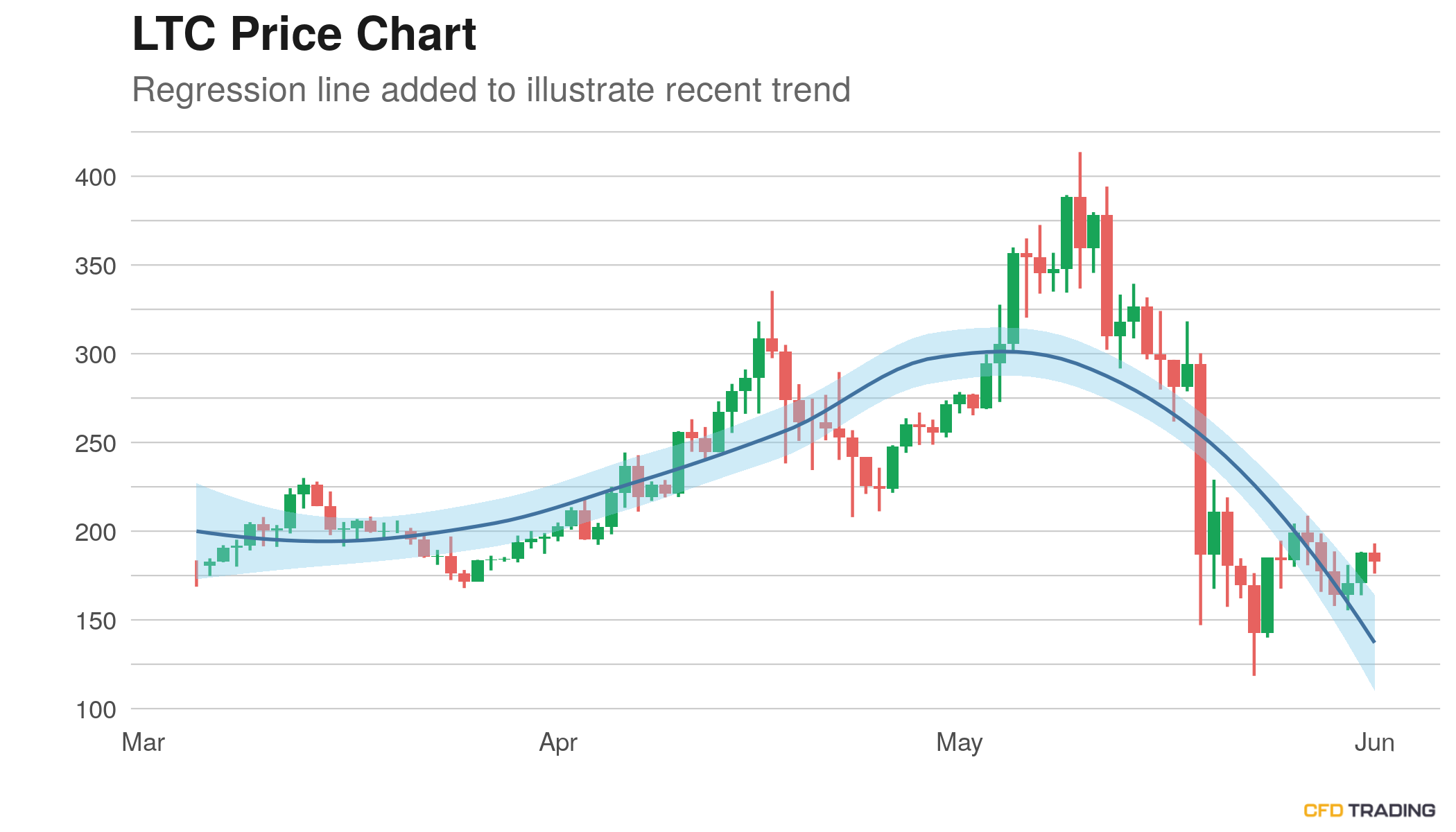 Coming into today Litecoin is now close to its 200 day moving averages, which may act as price barrier for the asset. Volatility for Litecoin has been contracting over the past two weeks relative to volatility over the past month. Whether volatility reverts will be something to watch. The clearest trend exists on the 30 day timeframe, which shows price moving down over that time. Or to view things another way, note that out of the past 30 days Litecoin’s price has gone down 16 them.

Over on Twitter, here were the top tweets about Litecoin:

As for a news story related to Litecoin getting some buzz:

In a Reddit Merged Mining AMA with the Dogecoin community, Litecoin creator Charlie Lee described Doge’s rapid distribution in the following way….As Litecoin’s hash rate continued to increase, Dogecoin’s network became more vulnerable by the day….Throughout this phase, Litecoin founder Charlie Lee contributed to the discussion by explaining to the Dogecoin community the benefits and negatives of merged mining with Litecoin….With Dogecoin hardforking and allowing merged mining, Litecoin miners (who after all, shared the same mining algorithm as Dogecoin’s), would be incentivized to protect Dogecoin’s network by mining LTC + DOGE simultaneously….At first, Litecoin offered a helping hand in securing Dogecoin’s network via merged mining — saying that, there could become a reality in which through Dogecoin’s constant inflation and continuous mining, miners could later return the favor by helping secure Litecoin’s network as it transitions into a fee-based system….Litecoin miners who decide to merge mine with Dogecoin are essentially receiving “extra gravy” on top of their mined Litecoin’s.

Cryptocurrency Litecoin Down More Than 3% Within 24 hours – Benzinga – Benzinga

This article features the latest updates on cryptocurrencies like Bitgert, Centcex, and more.Today, 27th Jan looks like it will be...

The decline has stalled once again in the crypto market, after the bearish momentum we saw last week and earlier...

Solana, Cardano, Matic, Avalanche, Litecoin, Bitgert & Centcex – What Will Be Next For These Projects? – Analytics Insight

Solana, Cardano, Matic, Avalanche, Litecoin, Bitgert & Centcex – What Will Be Next For These Projects?This article features next for...