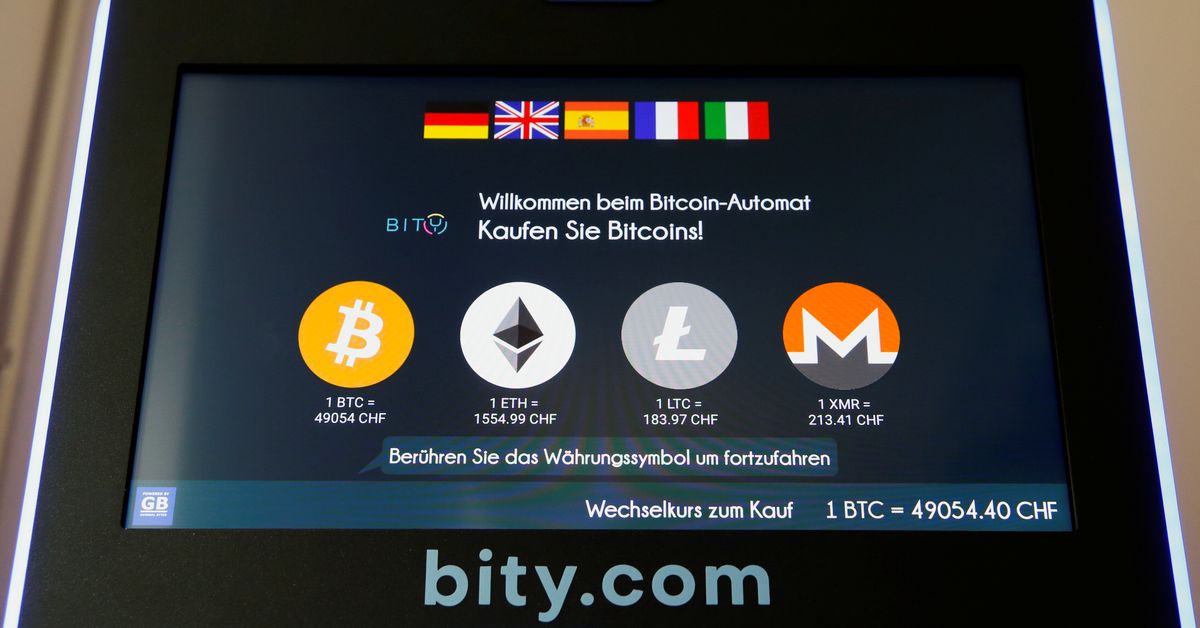 The exchange rates and logos of Bitcoin (BTH), Ether (ETH), Litecoin (LTC) and Monero (XMR) are seen on the display of a cryptocurrency ATM of blockchain payment service provider Bity at the House of Satoshi bitcoin and blockchain shop in Zurich, Switzerland March 4, 2021.

The Basel Committee on Banking Supervision has weighed in on cryptocurrencies. Punitive new proposals from the standard-setting body may ensure bitcoin remains in the fringes of regulated finance. Yet safer areas of the blockchain and crypto world are still accessible to JPMorgan (JPM.N), HSBC (HSBA.L) and others. It’s a good balance between prudence and progress.

The two most popular cryptocurrencies fall into the Basel Committee’s Group 2 designation, reserved for assets whose value fluctuates wildly or whose key participants could be untraceable and unregulated. That means a trading position or loan denominated in bitcoin would be subject to a 1,250% risk weighting. So, a $100 million asset would appear as $1.25 billion on the bank’s balance sheet, forcing a lender with an 8% capital ratio to hold $100 million of corresponding equity.

Such a harsh treatment will make it uneconomic for big banks to facilitate bitcoin trades in the way they handle bonds or currencies. Lending to clients who want to buy or sell short the asset would face similar penalties. Hedge funds, companies and other crypto-curious counterparties will have to stick with industry specialists like $47 billion Coinbase Global (COIN.O).

The proposals go easier on more humdrum areas of crypto. Basel’s Group 1 designation covers tokenised assets, such as a conventional bond where ownership is recorded on a decentralised register. As long as the underlying risks and ownership rights are the same, the standard-setters see no reason to massively increase capital requirements. The treatment of stablecoins, or cryptocurrencies whose value is tied to a steadier asset like the U.S. dollar, depends on the strength of the underlying claims.

That gives lenders permission to experiment with crypto’s underlying innovations without piling into volatile bitcoin. Bankers may fear missing out, but the sector is still young. The combined value of the 10 biggest cryptocurrencies is $1.3 trillion, according to CoinMarketCap. JPMorgan’s balance sheet alone is about three times as large. Supervisors are wisely ensuring that cryptocurrencies will remain largely outside the regulated banking system, at least in their current form.

– Banks must set aside enough capital to cover losses on any bitcoin holdings in full, global regulators at the Basel Committee on Banking Supervision proposed on June 10.

– The Switzerland-based body, which sets international standards that are then implemented by local watchdogs, advocated a twin approach to capital requirements for crypto assets.

– The first part covers so-called tokenised assets, where the ownership of traditional securities like bonds is recorded through a distributed network of computers or secured through cryptography and other similar techniques.

– Those assets could be subject to a similar capital requirement as the underlying financial products, with “add-ons” to account for the risk of unanticipated technological problems.

– The second group includes cryptocurrencies like bitcoin, which would be subject to a new “conservative prudential treatment” with a risk-weighting of 1,250% for the purposes of calculating capital requirements because of their “unique risks”.

– The consultation concludes on Sept. 10.