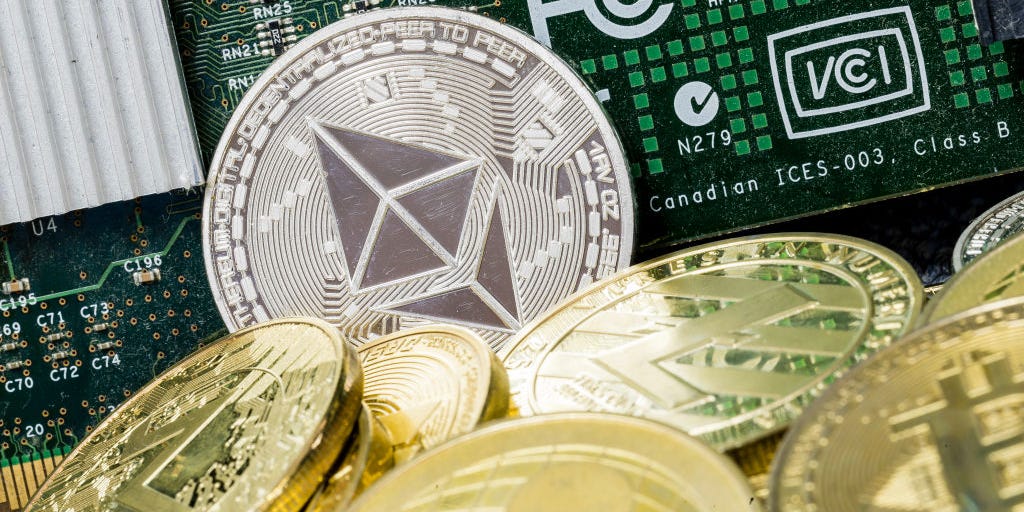 Traders’ eyes are glued to their screens on Friday as $1.5 billion worth of ether options is expiring today.

Given ether’s initial 16% plunge and then 56% surge within three weeks after its March 26 expiry, some are calling the latest expiry a make-or-break moment for bulls and bears.

With tales of forced liquidations and million-dollar losses amid recent bouts of corrections in the crypto market, it makes sense that investors are nervous about the outcome.

He added that among the expiring options, there was a significant number of call options at and over $2,200, which means about 73% of the call options will be rendered worthless if ether is under this price by the time of expiry today.

On the other hand, a majority of the put options are at $2,100 or lower, meaning these options will be virtually worthless if ether’s price goes above this level, he said.

Because ether was hovering just above $2,000 as of Thursday afternoon, the price can head toward either direction.

“If it remains at this level by Friday, investors with in-the-money put options may likely exercise their contracts,” he said on Thursday, “which will cause an initial downward pressure on ETH’s price due to oversupply on the sell side.”

Despite the near-term downward price pressure, Ehrlich said investors should not be too fixated on short-term volatility. Instead, he said he noticed that many Voyager users were continuing to buy ether as it held the top spot on its 24-hour net buys.

“For many investors, ethereum is a long-term asset given its real-world use cases and accelerating technology,” he said. “While it’s possible there may be a price drop at the expiry, many will see this as a trading opportunity, and we should see positive price momentum in the long term.”

So how should investors balance the short-term trading and long-term investing opportunities in the middle of ether’s largest options expiry this year? Insider spoke with six crypto traders, investors, and influencers to find out.

Pablo Heman, the pseudonym for a TikTok influencer with over 600,000 followers, is widely known for his price-point predictions on bitcoin and altcoins. He told Insider ethereum’s price action would depend more on bitcoin than its expiring options.

He said while ethereum’s upcoming option expiry would likely drag its price down, he believed the real influence would be tied to what bitcoin does. This is because the two are correlated, and bitcoin holds a larger share of the crypto market.

In this scenario, Heman compared ethereum to an otter in bitcoin’s river. If the otter were to swim in calm waters, its price action would mainly depend on its options expiring. But if bitcoin were to increase or drop, then the otter would need to swim against a strong current and end up trailing bitcoin.

“This is really difficult to anticipate right now because it’s not a normal period. Bitcoin is in a strong downtrend. Ethereum is essentially following bitcoin,” he said. “If I have to bet, I would say $2,000 to $1,800 is where ethereum will be by Friday if bitcoin is anywhere between $32,000 to $29,000.”

Ian Balina, the founder and CEO of the research platform Token Metrics and a crypto YouTuber, told Insider ethereum’s price action would depend on whether the crypto dipped below $2,080.

“The tipping point would be around $2,080. This is basically kind of like a tug-of-war happening between traders and market makers,” he said. “So from there, depending where the pendulum swings, we can expect downward pressure or upward pressure on particular price points.”

“So ideally, a move in ethereum closer to $2,500 will break away from the downward pull on ethereum. But if ethereum goes below $2,080, the next level would be $1,920,” he added. “If it breaks, that it’s probably going down to $1,732, just looking at the way the market is going with the order book on options.”

But he isn’t concerned about short-term price swings because he’s bullish on the crypto, and he said the upgrades scheduled to take place, known as the London hard fork, would make ethereum deflationary. The rollout is tentatively scheduled for sometime in July.

But Balina said he expected a delay on its price increase, adding that it may not be reflected until August. He compared it to bitcoin’s 2020 halving, when it took a few months for the upward trend to begin.

In the most bullish scenario, Balina said his company’s models showed ethereum going to $8,000 or $10,000 within the next 12 months.

Scott Melker, an influential crypto trader and investor known as “The Wolf of All Streets,” told Insider that while it was hard to predict the price influence because of a still immature ether-options market, investors could look to the bitcoin options market for clues.

“There’s definitely been a history of price suppression coming into the options expiry and an explosion in price after those expires,” he said. “It usually is a short-term phenomenon, but it makes sense that price would be somewhat controlled into the expiration.”

From his vantage point, the bearish traders are squarely in control of the June 25 options expiry, meaning they stand to benefit the most if ether’s price is suppressed going into the expiry.

“Once the reins are sort of taken off, they can go wild,” he said. “I would say that you would expect price appreciation after that expiry.”

What’s also notable about this expiry is that ether is inching closer to its max pain price of $1,920, which is the strike price with the most open contract puts and calls, or the price where most options would close out of the money and expire worthless.

“People often point to that price as where to look for the price to likely go because that was basically the cause of the most pain for most traders,” he said. “So that’s not so far below the price at this point we’re trading at. Generally, you’d see a trend of price depression and then free price discovery after.”

Kevin Kang, a founding principal of crypto hedge fund BKCoin Capital, said he noticed on Wednesday that the put/call ratio had gone up from 0.81 to 0.97 in the past 24 hours, which means a lot more traders have bought puts to protect themselves against the downside as the market has been in the downward trend.

“Seems like traders are protecting the downside going into this Friday, as well as buying the puts and selling calls to market makers as the spot-future basis has come in significantly, even trading in backwardation on some exchanges,” Kang said in an emailed interview.

As traders are buying puts and selling calls to market makers, volatility has come down over 20% this month, he said.

“It seems logical to think that with lower volatility, higher prices will follow, as we saw in last summer where the market traded sideways for a few months, and the volatility came down,” he said. “Then the ETH had explosive price gains from $200 range to over $440 within six weeks.”

Indeed, Alex Clark, a sales trader at the UK digital-asset broker GlobalBlock, said she thought that June 25 would likely dictate the direction of the ether spot market going forward and could assist in reaching a new high.

“Based on the March expiry, which saw ether’s value drop by 16% before rebounding 56%, in the short term, I am anticipating increased volatility and more price action to the downside,” she said.

Clark said the ethereum London hard fork, which is set for July, would introduce a deflationary mechanism, which could make the asset more attractive to long-term holders and institutional investors.

“Based on this, I am preparing for a potential decoupling of ETH from BTC as the market matures with a long-term price target of $5,500 by August 8,” she said.

Coinbase Betting Big On Staking Ahead of Ethereum Merge – Decrypt

Coinbase Betting Big On Staking Ahead of Ethereum Merge  Decrypt