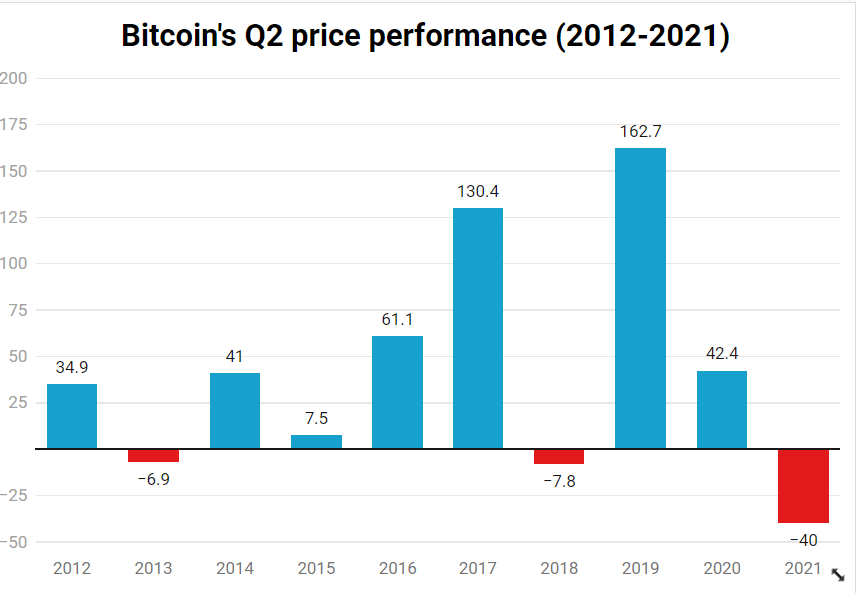 Bitcoin prices are on track for a record second-quarter percentage decline, weighed down by China’s crackdown, concerns the U.S. Federal Reserve will start tapering its stimulus program and persistent demand for downside hedges.

The leading cryptocurrency was trading near $34,824 at 10:39 UTC on Wednesday (6:39 a.m. Eastern time), down almost 41% for the April to June period. The drop snaps a four-quarter winning streak that saw prices chart a sixfold rise to almost $60,000, according to Bitstamp data.

The historically strong quarter began on a positive note, with bitcoin rallying to a record $64,801 in the run-up to the Nasdaq debut of cryptocurrency exchange Coinbase on April 14. However, momentum stalled in subsequent weeks as retail investors struggled to do the heavy lifting in the wake of selling by large investors.

Related: ‘They’d Rather Buy Bitcoin and Take That Risk’: An Interview With Paxful’s Nena Nwachukwu

The market, therefore, looked weak and took a beating in mid-May after U.S. electric-car maker Tesla delisted bitcoin as a payments alternative, citing environmental concerns and dashing hopes for widespread corporate adoption. China’s reiteration of the crypto-mining ban and concerns of an early unwinding of stimulus by the Fed amplified the bearish move, pushing prices down to a then four-month low of $30,000.

Since then, bitcoin has traded mainly in the range of $30,000 to $40,000, barring a brief drop to $28,600 on June 22. Sentiment has turned quite bearish, as evidenced by directionless trading in the wake of El Salvador’s decision to adopt the cryptocurrency as a legal tender.

Moreover, fears of a deeper sell-off persist, according to the so-called options smile – a chart created by plotting implied volatilities against options at various strike prices expiring on the same date. Implied volatility refers to investors’ expectations of price turbulence over a specific period. It is influenced by demand for call and put options.

The option smile for short-date and near-dated expiries carries a steep slope at strikes lower than bitcoin’s current price. That’s a sign of relatively higher implied volatility or demand for options at lower strikes than those at higher strikes. In other words, investors are continuing to buy protective puts – contracts that give purchaser the right but not the obligation to sell the underlying asset, in this case bitcoin, at a predetermined price on or before a specific date.

“Bitcoin is in a consolidation phase, and we think this can stretch through September,” he said. “Since its peak in April, the institutional interest has waned, and there is lack of liquidity from both corporations and retail buyers.”

According to Balani, the cryptocurrency remains vulnerable to any weakness on the macro front and could drop to the former hurdle-turned-support of $19,666 (December 2017) in case of a broad-based risk aversion.

Currently, traditional markets are showing no signs of weakness. Despite the Fed’s recent hawkish talk, the S&P 500, Wall Street’s benchmark equity index, is on track to end the second quarter 8% higher, a fifth consecutive quarterly gain. Meanwhile, gold, a safe haven, has erased most of its gains to trade just 2% higher for the quarter, according to TradingView data.

The situation, however, could change if the U.S. economy continues to accelerate, reviving fears of an early Fed tightening.

That said, some observers remain optimistic and are drawing parallels with the price action seen in 2013 when bitcoin crashed from $250 to $45 in April, bringing the bull run to a screeching halt, only to surge to four figures by November.

“While I don’t think the bottom is in, the market looks like 2013, and bitcoin could see a mega pump,” John Lilic, ConsenSys alum, Polygon adviser and Dfinity whale, told CoinDesk in a Telegram chat.

“From a technical analysis perspective, the second-quarter drop is a pullback,” Dibb said on a WhatsApp chat. “Bitcoin is still in the stage of a parabolic advance.”