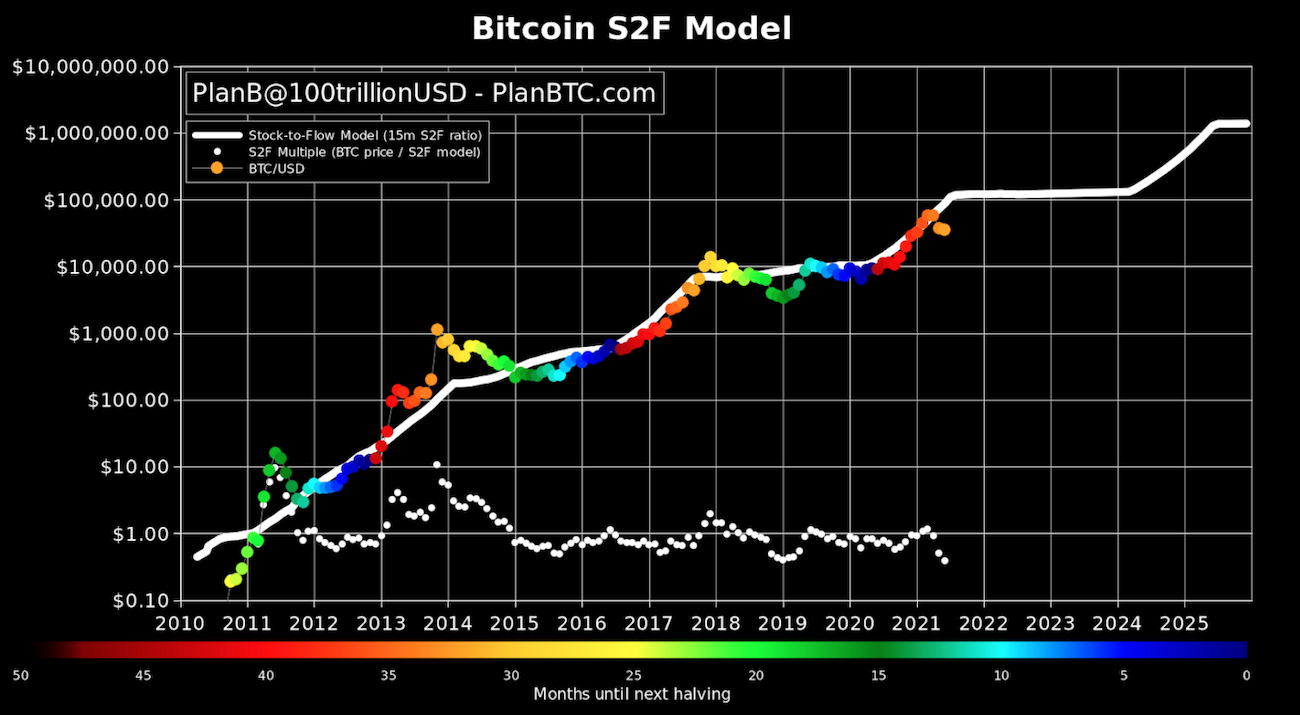 One of the most widely used charts for predicting massive future bitcoin price gains is showing the largest divergence since January 2019.

The bitcoin stock-to-flow model currently suggests that the price of bitcoin should be around $77,900. But as of Monday, the cryptocurrency was trading at $33,668, well off the all-time high price of $64,829 reached in April.

Crypto analyst ‘PlanB’, who has been documenting his stock-to-flow model since March 2019, tweeted that BTC/USD is now the furthest away from the estimated value in more than two years.

He said that the next six months will “make or break” the stock-to-flow model.

The stock-to-flow model is generally applied to natural resources like gold or silver. The commodities are often referred to as “store of value” resources that, in theory, should retain their value over the long term due to their scarcity and low flow.

The idea is that low supply makes the metals more like “hard money” – contrasted with the dollar. This is an especially harsh juxtaposition as the Federal Reserve has printed more than $4 trillion of fresh dollars since the coronavirus pandemic hit in March 2020; that’s the same amount the U.S. central bank had previously created since it was established early last century.

Bitcoin, sometimes touted by proponents as “digital gold,” is treated as if it were a scarce commodity for the purposes of the model. Bitcoin is costly to produce and considered scarce, as its maximum supply is capped at 21 million coins.

The cryptocurrency also undergoes “bitcoin halvings” where the number of bitcoins entering the system with every new data block – every 10 minutes or so on average – gets cut in half. These halvings take place roughly every four years.

“Bitcoin has limited supply, which is great and well known,” said Charles Morris, founder of ByteTree Asset Management. “As supply is cemented, the price can only be driven by demand.”

In the past, the bitcoin stock-to-flow model has been used to forecast future BTC price action. Pantera Capital, a hedge fund that specializes in cryptocurrencies, predicted in April 2020 that bitcoin could rise to $115,000 by August this year, using this model.

“According to the model’s projections, bitcoin’s price should see a significant increase over time due to its continually reduced stock-to-flow ratio,” said Binance Academy in a blog post.

It’s worth noting that the model relies heavily on the assumption that the scarcity of the cryptocurrency should drive value, which might not always be the case. That’s especially true because of the notoriously volatile short-term swings in the bitcoin price.

“The stock-to-flow model was created on the back of two halving events,” Morris said. “I agree, with some caution, that halving may boost the price by roughly 2x, as miner selling pressure halves, but the notion the future price path is assured multiples beyond this is ridiculous.”