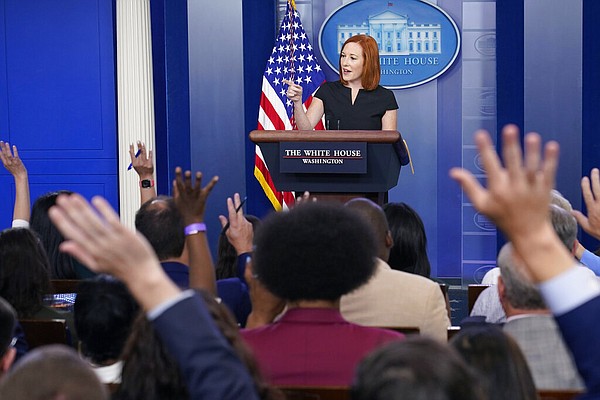 WASHINGTON — President Joe Biden told Russian President Vladimir Putin on Friday that the United States will take “any necessary action” to defend U.S. infrastructure after Russia-based hackers carried out the largest known ransomware attack to date, afflicting up to 1,500 companies, schools and hospitals around the world.

Biden has been under increasing pressure to counter such costly, brazen assaults — pressure that spiked last weekend after the latest attack, which was claimed by a criminal group called REvil operating largely out of Russia.

In a phone call, the president warned Putin that Russia must take action to disrupt ransomware groups operating there, or the United States would impose consequences, the White House said in a statement.

“I made it very clear to him that the United States expects when a ransomware operation is coming from his soil, even though it’s not sponsored by the state, we expect them to act if we give them enough information to act on who that is,” Biden said after the statement was released.

[Video not showing up above? Click here to watch » https://www.youtube.com/watch?v=qPKMU46NCoQ]

The White House declined to discuss the tone of the call.

Asked later by a reporter if there will be consequences, Biden said, “Yes.”

The president did not elaborate, nor did other officials immediately announce any specific actions they were taking or would consider. There are few easy options to resolve the threat without risking a conflict that could spiral out of control beyond the cybersecurity realm.

Biden said Washington and Moscow have “set up a means of communication now on a regular basis to be able to communicate with one another when each of us thinks something is happening in another country that affects the home country. And so it went well. I’m optimistic.”

Friday’s call came after a meeting between the two leaders three weeks ago in Geneva, during which Biden delivered a similar warning.

The Biden administration took office on the heels of a cyberespionage campaign known as SolarWinds that U.S. officials have linked to Russian intelligence operatives. But ransomware attacks, perpetrated generally by criminal hacker gangs rather than state-sponsored hackers, appear to have eclipsed old-fashioned spying as a potent threat.

Ransomware attacks are now treated by the federal government as a national security matter. An assault on Colonial Pipeline in May led to long lines and gasoline shortages in much of the Southeast, and a June attack on JBS, the world’s largest meat supplier, sparked fears of beef and pork shortages.

Cybersecurity researchers have said the latest breach affected victims in at least 17 countries, largely through firms that remotely manage IT infrastructure for multiple customers.

Though Biden has said the attack caused “minimal damage” and it did not appear to target vital infrastructure, the sheer global scale and the fact that it occurred so soon after the Geneva meeting put immediate pressure on the administration to respond.

Though attacks have increased over the past 18 months, “this is the first time … that there has been this level of engagement at this level,” White House press secretary Jen Psaki said of Biden’s approach.

“Let me say that the president is a believer in face-to-face diplomacy when possible and leader-to-leader diplomacy when that’s not possible,” she said. “And certainly the president knew, even when they met in Geneva, that there would be a need for ongoing discussions and engagements.”

After the Geneva summit, the two sides began strategic consultations involving White House cyber and regional experts and Russian officials. Another virtual meeting is scheduled for next week.

Psaki also declined to say what actions the United States might take if Moscow fails to curb the attacks. “I don’t think anyone expects [the president] or us to preview our punches,” she said.

According to the Kremlin’s readout of their call, “Putin noted that despite the Russian side’s readiness to jointly stop criminal activities in the information sphere, U.S. agencies haven’t made any requests during the past month.”

A senior administration official disputed that. “We have relayed multiple specific requests for action on cyber criminals” to Moscow “and been clear about what Russia’s responsibility is with regard to taking action, including again today,” said the official, speaking on condition of anonymity under ground rules set by the White House.

The Kremlin said the two leaders emphasized the need for cooperation on cybersecurity, which it said “must be permanent, professional and non-politicized, and should be conducted via special communication channels … and with respect to international law.”

Even as Biden’s remarks raise the prospect that the United States will take decisive action to punish Moscow if the attacks continue, administration officials sought to temper expectations of a quick cessation of attacks.

“This is a broad campaign and won’t have an immediate on-off effect like a light switch,” the official said, “but we’re going to have to stay on top of it over a long period of time.”

The official alluded to Biden’s statement in Geneva that “we’ll find out within six months to a year” whether the engagement with Russia is working.

“The president really meant what he said … when he said that our assessment of this process, and our evaluation of Russia’s actions, would take time,” the official said.

The White House strategy extends beyond the bilateral talks. “This is really about our own resilience as a nation in the face of these attacks,” the senior administration official said.

“It’s about addressing the challenges posed by cryptocurrency, which provides fuel for these sorts of transactions. It’s about ensuring that our allies and our partners are working with us collaboratively and upping their own game when it comes to resilience,” the official said.

The Kremlin statement also noted that Biden and Putin touched on the situation in Syria “with a special emphasis on humanitarian aspects,” and “gave a positive assessment of coordination of Russian and U.S. efforts on the issue, including in the U.N. Security Council.”

Information for this article was contributed by Ellen Nakashima, Eugene Scott and Robyn Dixon of The Washington Post; and by Zeke Miller, Eric Tucker and Vladimir Isachenkov of The Associated Press.