If you feel lost trying to understand these price movements, you are not alone. Most people – including government officials – struggle to understand the technology behind bitcoin (blockchain) and its potential impact on our lives.

How should governments deal with this technology? And how could they harness its potential to advance national development priorities and achieve the Sustainable Development Goals (SDGs)? 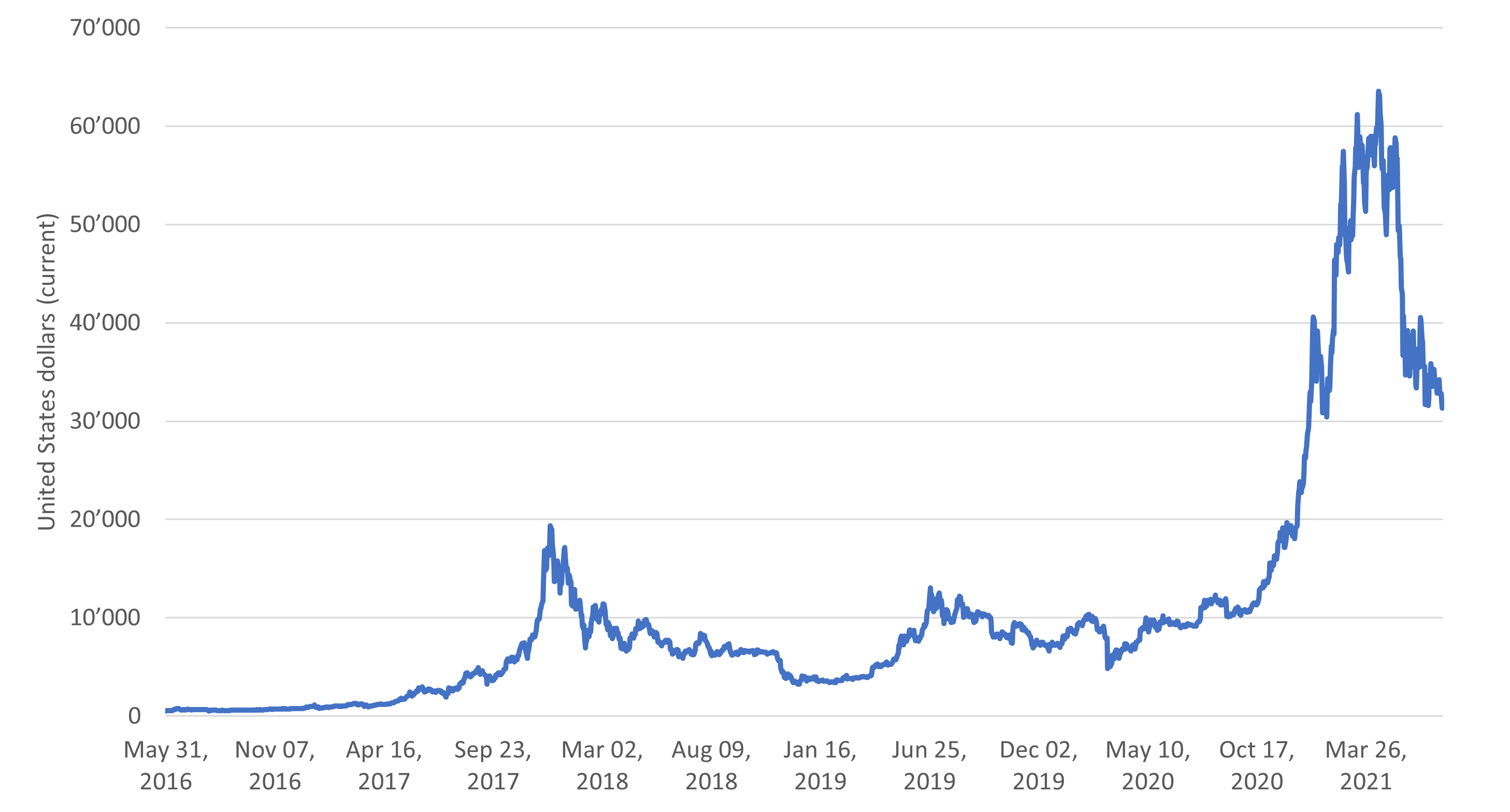 Source: Authors based on data from Investing.com.

Blockchain was invented to create bitcoin but can now store computer code and “smart contracts”. The technology offers the possibility to innovate in virtually any area, but the top uses are currently for cryptocurrencies and decentralized finance (DeFi) applications, which use blockchain-based smart contracts to implement financial instruments.

The UN Commission on Science and Technology for Development (CSTD) paid keen attention to the significance of blockchain in the real economy at its annual meeting in May 2021, looking at the areas of trade, logistics and supply chains. Following discussions at the CSTD, UNCTAD recently published a report on how to harness blockchain for sustainable development.

Like any technology, blockchain can contribute to the SDGs in various ways – from providing food vouchers in refugee camps to enhancing property and land registries to improving access to national identification. So far, however, blockchain innovation has mostly focused on speculative gains in crypto-financial assets instead of creating real value through new products and services.

This is a recipe for financial bubbles and bursts.

Blockchain is potentially a key technology in a new technological paradigm of increasing automation and the integration of physical and virtual worlds. Its impact goes beyond the economy, as it can transform social interaction, public institutions and our relationship with the environment, and affect countries’ options for pursuing sustainable development.

Based on the assumption of a new technological paradigm, blockchain is in the installation period of a technological revolution – dominated by radical innovations (led by suppliers), experimentation, new technological solutions, many standards and competing technical specifications.

As a result, there is a tendency for speculation, and “money creating money” schemes emerge with the gradual decoupling of the real economy and the financial sector.

The end of the installation period is prone to financial bubbles. It is too early to say if we are witnessing bubble-bust-like prices movements in bitcoin and other crypto assets, but the way blockchain innovation is self-financed could expedite this process and create a series of periods of installation, crisis, and deployment particular to blockchain innovation.

Figure 2: The evolution of blockchain 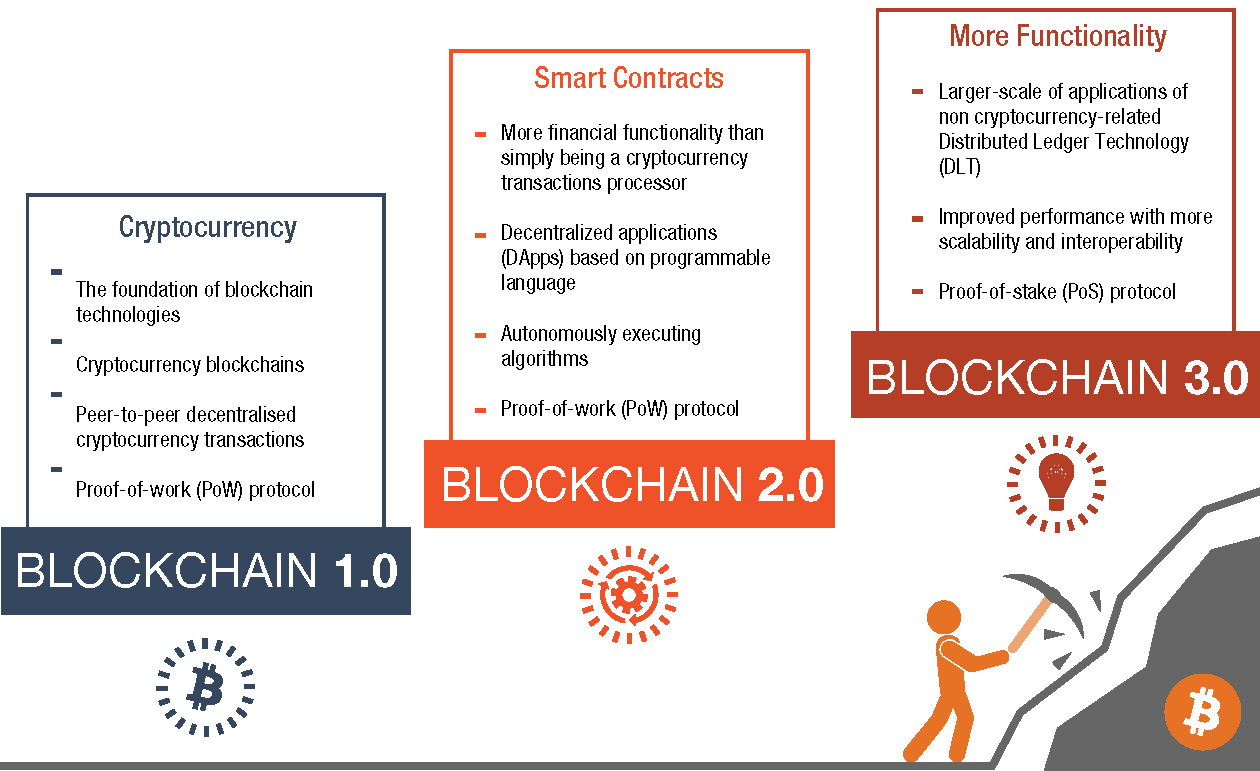 If those affected are mainly the innovators and venture capitalists in the blockchain ecosystem, the boom-and-bust cycle may not create enough pain for the required changes in institutions. But with increasing public interest in crypto assets, we may start to hear stories of small, everyday investors losing all their savings in the latest bust.

Unfortunately, only after many such cases will there likely be the required push for an institutional change of laws and regulations to address the risks.

A window of opportunity

Catching up would increase real incomes and government finances, helping to accelerate progress towards the SDGs.

Governments should strengthen their innovation systems to strategically position themselves to benefit from this new technological wave. For most developing countries, this will require improving their digital infrastructure, skills and regulatory frameworks.

Encouraging pilot projects could kickstart the diffusion of blockchain. For example, UNCTAD’s customs modernization programme ASYCUDA is looking to use blockchain technology to improve its systems. The knowledge and skills on blockchain developed through this initiative could spill over to other sectors in the more than 100 countries where ASYCUDA is operational.

Close cooperation with the private sector is critical for success. Also needed is a whole-of-government approach, where ministries of ICT, finance, trade, and science, technology and innovation work together with central banks and regulators.