Ripple price is on a remarkable upswing indicating that bulls are back in town. XRP is bulls are focused on reversing losses that reached $0.51 on Tuesday. The support at $0.52 was vital for ensuring that further losses are averted.

The cross-border remittances token has made significant recoveries in an upward rally that has seen XRP flip the 20-day Simple Moving Average (SMA), 50-day SMA and the 100-day SMA from resistance to support on the four-hour chart.

At the time of writing, Ripple price was exchanging hands at $0.609 on most trading platforms as bulls battle the immediate barrier at 0.62.

Can XRP Bulls Sustain Recovery to $0.65?

Ripple formed a V-shaped recovery pattern on the four-hour chart bouncing off support at $0.52. A V-shaped recovery occurs when an asset rises rapidly following a lengthy period of decline. This pattern is highly bullish and usually presents oversold conditions that allow buyers to take control of the market.

Ripple price traders made haste to take the plunge, expecting XRP prices to make a steep rise.  If you want to buy Ripple, this list of top crypto brokers might be helpful.

It is expected that bulls will maintain the momentum to extend XRP price to areas beyond $0.65 before meeting a significant resistance at $0.68.

Note that the recovery took a breather due to the selling pressure from the 100-day SMA at $0.60. Nonetheless, Ripple broke overcame this barrier gaining ground towards the current price at $0.609, a move that could see bulls bolstered to gain levels above $0.65. 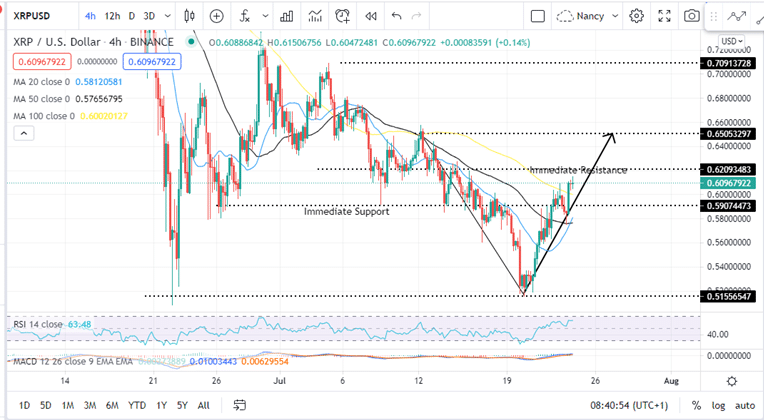 Technical analysis using the Moving Average Convergence Divergence (MACD) and the Relative Strength Index (RSI) add credence to the bullish outlook. When the MACD line (12-day Exponential Moving Average (EMA) ) crossed above the 26-day EMA (signal) on June 21, it marked the beginning of the upward rally. Note that this bullish momentum will be sustained as long as the MACD remains above the signal line in the positive zone.

At the moment, bulls should aim at overcoming the immediate resistance at $0.62. if this happens, Ripple’s traction towards $0.65 might be achieved and even explore the July 4 high at $0.709.

Can XRP’s Rally Be Invalidated?

Currently, Ripple price appears to have paused perhaps due to the resistance at $0.62. Note that failure to close the day above this point, the bullish thesis could be invalidated forcing XRP to test the support offered by the $100-day SMA at $0.597. Further retractions could see XRP re-test the $0.59 and $0.56 support levels before making another comeback.

The possibility of this bearish outlook is validated by the Relative Strength Index (RSI) by its downward movement towards the midline.

Looking to buy or trade Ripple now? Invest at eToro!

Get the 5 most predictable currency pairs