Horizon Blockchain Games is — as the name implies — a company building games on the blockchain, along with tools to help others do the same.

The company announced today that it has raised another $4.5M, bringing its total raised to a little over $13M.

Horizon’s first game is Skyweaver, a competitive digital trading card game which taps the blockchain to give players more realistic ownership of their virtual cards. Once earned through competition with other players, cards can be sold, traded, or taken out of the system and put in storage.

As I previously wrote about Horizon here:

Horizon is working down two paths in parallel here: On one path, they’re building an Ethereum-powered platform called Arcadeum for handling in-game items — establishing who owns any specific instance of an item, and allowing that item to be verifiably traded, sold or given from player to player. Once an item is in a player’s possession, it’s theirs to use, trade or sell as they please; Horizon can’t just take it away. In time, they’ll open up this platform for other developers to build upon.

On the other path, the company is building out its own game — a digital trading card game called SkyWeaver — meant to thrive in its own right while simultaneously showcasing the platform.

“Arcadeum” mentioned above has now been rebranded as “Sequence“, an easy-to-integrate wallet system that aims to hand-wave away the complexities of the blockchain. They want to let users buy and store their digital goods on the blockchain without either the user or an app’s developer really having to think about the blockchain. Horizon co-founder Michael Sanders tells me the rebranding comes with an overall broadening of its focus; the ‘Arcade’ in ‘Arcadeum’ suggested it was all about gaming, whereas the aim is to help manage all kinds of digital items, from virtual gaming goods to NFT art and beyond.

The Horizon team often mentions being built to support “Web3”, a term I’ve been hearing more and more lately. In short (or, at least, as best I understand it), Web3 is a category of online-but-decentralized apps, services, and games built around the blockchain (Ethereum, in this case) to give individual users more control of their data. The Ethereum foundation has a breakdown of the concept here. 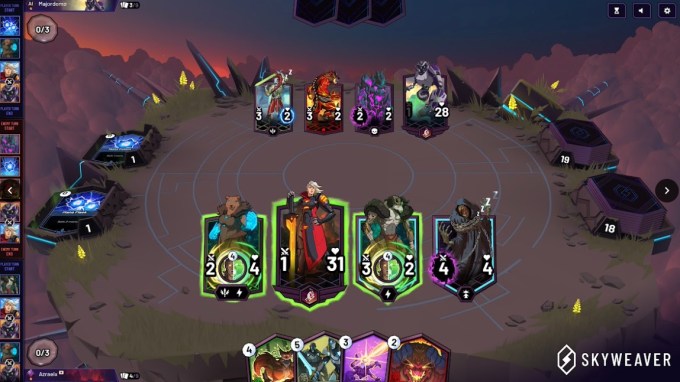 Horizon originally intended to open Skyweaver up more broadly in 2020; as of this morning it’s still in private beta, with plans to open widely later this year. Sanders tells me they’ve let in over 66,000 players so far.

The company says that investors in this round (a “pre-Series A round SAFE”) include CMT Digital, The Xchange Company, BITKRAFT Ventures, Khaled Verjee, and Zyshan Kaba.