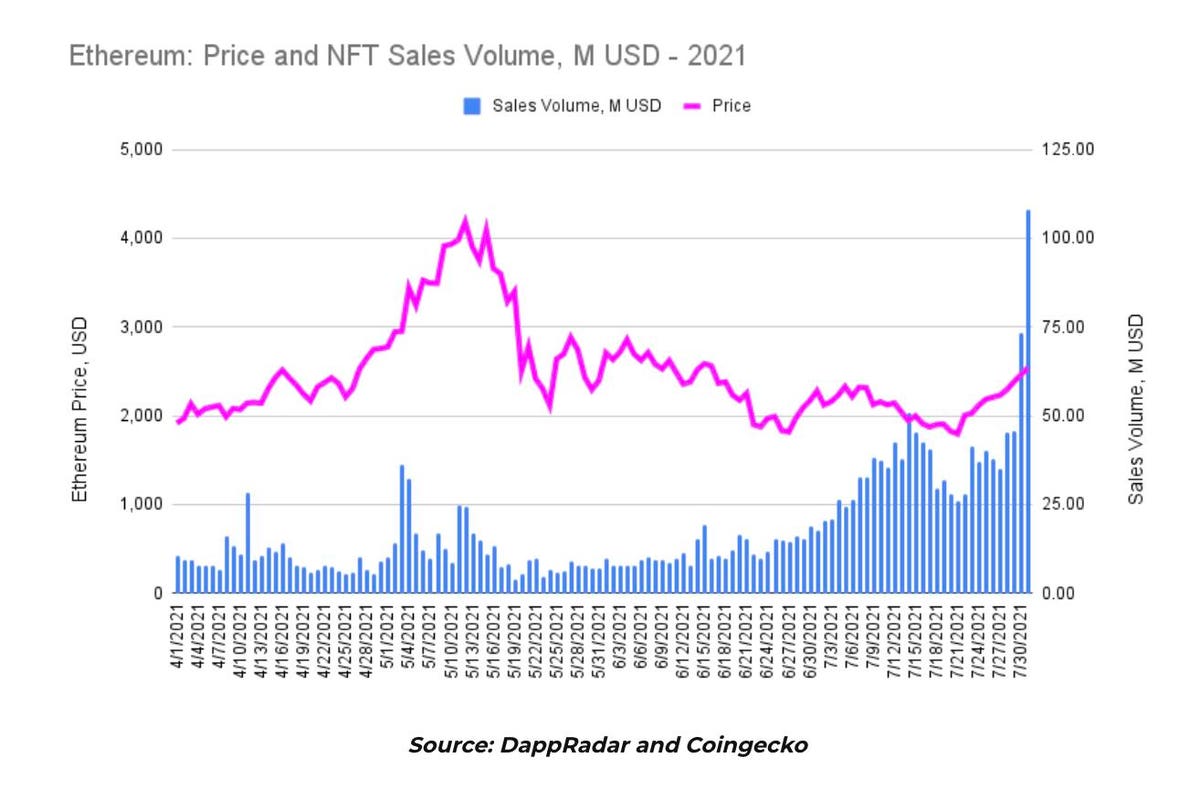 Trading volumes of top NFT collections such as Axie Infinity, CryptoPunks and ArtBlocks have increased by more than 300% over the past month, according to DappRadar, a Lithuania-based data tracking company. The surge comes after the market had lost steam following the white hot first quarter, which saw a record-high transaction volume, generating more than $1.5 billion in sales, and could provide a new way forward for sustainable growth in the industry.

In July, NFTs raked in over $1.2 billion in sales – almost a half of the $2.5 billion cumulative sales volume in the first two quarters of 2021 – and the dapp (decentralized applications) industry as a whole registered more than 1.4 million daily unique users, a 23.72% increase from the previous month, the firm’s latest report shows.

Much of the boost is attributed to the success of play-to-earn games such as Axie Infinity, a blockchain-based game that allows players to earn income in the form of tokens and other rewards by breeding, battling and trading digital pets called Axies. The game, launched in 2018, has taken off primarily in the Philippines, providing an alternative source of income for the population hard hit by the pandemic.

Last month, it became the most valuable NFT collection ever, surpassing perhaps the most recognizable marketplace of the sector, NBA Top Shot, with more than $830 million in trading volume ($600 million registered in July alone). During the second week of July, Axie Infinity even generated more protocol revenue, $35.8 million, than Ethereum and Bitcoin. Axie Infinity’s governance token AXS is also one of the best performing digital assets year-to-date, posting a 431% price increase over the past 30 days and a 7089% growth since January, according to Messari.

Other similar games with income generation opportunities are also taking off on Ethereum’s blockchain rival, Binance Smart Chain (BSC). According to DappRadar, BSC is now the most used network in the industry with more than 658,000 unique users in July; second and third places belong to WAX and Ethereum with 336,000 and 105,000 unique users respectively. BSC-based play-to-earn game CryptoBlades has become the second most used decentralized application behind decentralized exchange PancakeSwap, generating over $92 million in more than 50 million transactions in its first days.

“With trading volumes skyrocketing, gaming collectibles are hands down the stars of the past month,” wrote Dragos Dunica, CDO & co-founder of DappRadar, in an e-mailed comment to Forbes. “Visits to games-related pages increased eightfold in July alone, and the number of unique active wallets we’re tracking on all the games doubled to ~740K. As we plunge deeper into the metaverse, blockchain gaming is set for meteoric growth.”

Among other notable milestones of July, the largest marketplace for non-fungible tokens, OpenSea, raised $100 million from an array of high-profile investors including Andreessen Horowitz (a16z), Coatue and Kevin Durant at a $1.5 billion valuation. In addition, beverage giant Coca-Cola has recently auctioned its first ever NFT collection, joining the growing number of mainstream brands experimenting with digital collectibles.