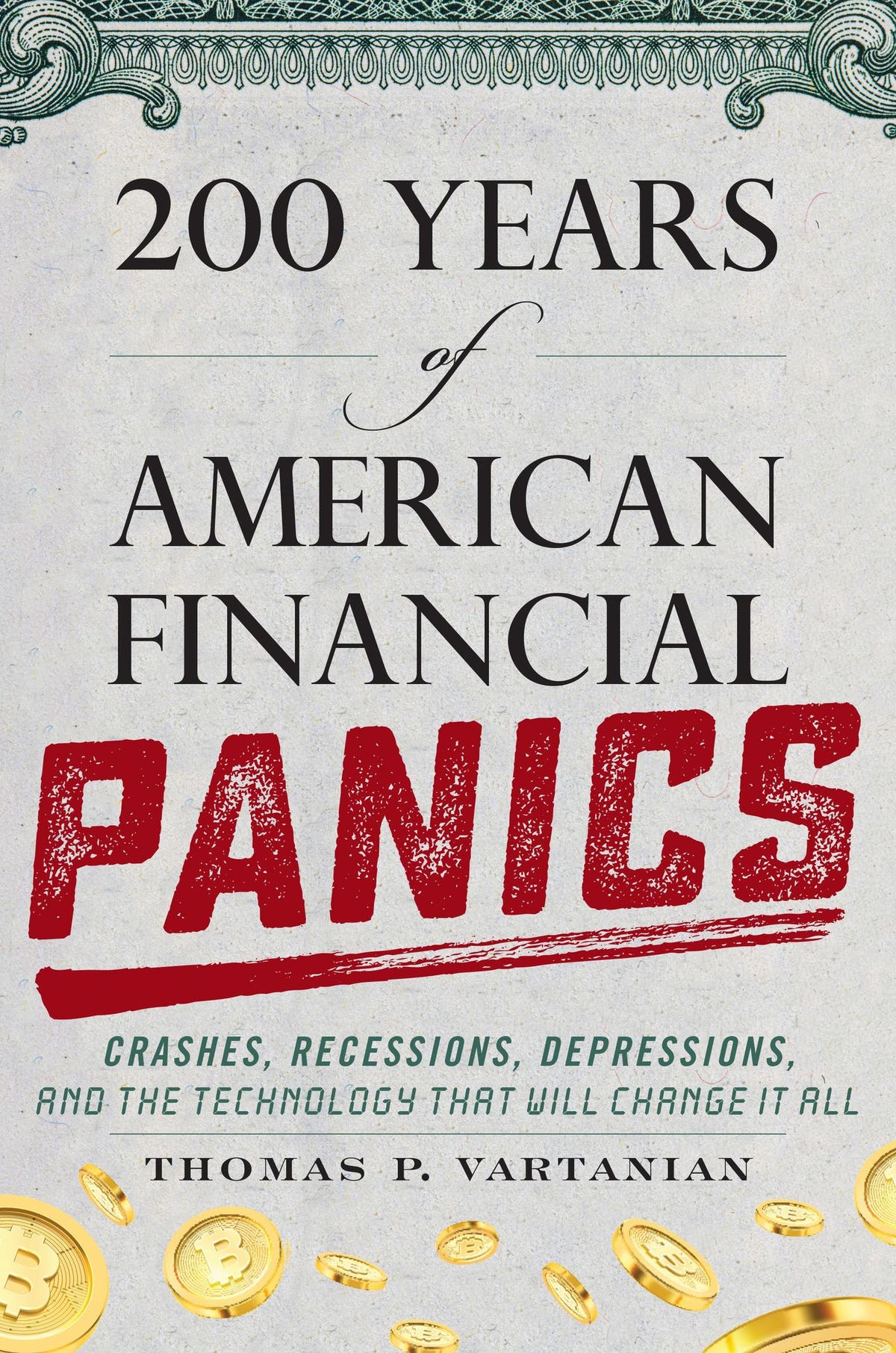 The Security Exchange Commission’s (SEC) lawsuit against the online payment protocol and global exchange network Ripple Labs may seem like a new development, but US financial regulators frequently find themselves behind the curve on technology. According to fintech futurist Thomas P. Vartanian, the case is a replay of the money market mutual funds of the 1980s which “initially seemed to defy definitive categorization as either money, deposits, securities, or commodities – something that often happens when a new product hits the market and transcends the legal boundaries that Congress previously established.“

Vartanian predicts the future of finance by studying the past. His new book 200 Years of American Financial Panics: Crashes, Recessions, Depressions, and the Technology that Will Change It All details the role of regulation in creating financial crises. He experienced many crises first hand as a regulator, serving the Carter Administration during a period of stagflation at the Office of the Comptroller of the Currency and later in the Reagan Administration as General Counsel of the Federal Home Loan Bank Board and the FSLIC, when he oversaw the rationalization of hundreds of failed institutions during the Savings & Loan crisis. In addition to his career of writing and teaching about financial law and technology, he is launching the Financial Technology, Regulation & Cybersecurity Center to explore information technology threats to America’s critical financial infrastructure. Vartanian weighs in below on SEC v. Ripple, the government’s infatuation with technology and its failure to achieve smart regulation.

What are your thoughts on SEC v. Ripple?

Vartanian: SEC v. Ripple is tangible evidence that governmental infatuation with technology is evolving beyond the mesmerizing effect that new technological products often enjoy. The SEC’s action suggests it is time to blow past the fanfare and get down to a rigorous evaluation of the fundamental financial characteristics of crypto products. When such new products like cryptoassets begin to attract a critical mass of users, administrative regulation is there to burrow into the weeds and either trigger Congressional action, categorize the product according to current rules, or change the boundaries to ensure market stability and competitive fairness.

In the Ripple case, the SEC claims it is pursuing consumer protection, but it has definitively harmed consumers as the class action lawsuit from 18,000 XRP holders against the SEC attests. The sudden SEC action to declare Ripple a security has precipitated the delisting of XRP on many currency exchanges, causing the value of XPR to plummet. The irony is that we have tons of laws and regulators for financial services, but they say little about cryptocurrency. The emergence of cryptocurrency has led to a mad dash by no less than 8 regulators asserting jurisdiction over the technology, with little guidance, much less statute, from Congress. What’s to stop other regulatory agencies from running roughshod over any new financial technology?

Vartanian: For starters, the US is the only country that has a dual system of banking that has hundreds of state and federal regulators bumping into each other and fighting over jurisdiction. That is not the whole story, but the redundancy and inefficiency in the system is something we need to improve. There have been efforts to consolidate prudential regulation since the inception of the Federal Reserve in 1913. Seventeen bills have introduced in Congress proposing reorganization structures for prudential regulation, and over 20 government commissions or initiatives that evaluated and developed reorganization proposals. I participated in the Vice President’s Task Group on Financial Services Regulation which began in 1982 and produced a compendium of recommendations to move toward functional regulation of activities. If those recommendations had been adopted, we likely would have avoided much of the pain of the subprime meltdown in 2008 triggered by risk hiding in plain sight in the unregulated parts of the financial markets. With technology dominating the financial landscape, now is the time to regulate financial activities rather than just banks.

What is your take on what happened to cryptocurrency in the recent infrastructure bill process? The notion that any crypto “broker” must report to the IRS is concerning, particularly was this could sweep up unrelated actors like traders who have no customers, or ISPs facilitating internet transmissions. This seems like yet another example of regulation by enforcement without clear congressional action.

Vartanian: Reporting is the beginning point for regulatory assessment and supervision. But when reporting and the data that is sought is not well defined, it runs the risk of covering too many entities and providing too much irrelevant and distracting information. This battle in the infrastructure bill about who a cyrpto broker might be is very similar to other important forms of oversight that have been implemented. For example, after 2008 crisis, when Congress and the regulators sought to regulate “securitizers” under the mortgage-backed securities (MBS) risk retention rule in the Dodd-Frank Act, the definition originally covered almost everyone who touched a MBS, which would have made the process less effective and gummed up markets. Similarly, reporting crypto-transactions needs to avoid features of reporting transactions for money laundering control purposes that result in the collection of historic data when the challenge is to identify violations in real time. Effective supervisory and data collection systems need to be as focused as possible to be effective, otherwise they inevitably overwhelm regulators with too much data. But the key point is that all of these systems need to be dragged into the 21st century and augmented by the most sophisticated forms of technology and artificial intelligence so they can be as effective as possible. Technology will help regulators get at the substance of the problem rather than merely collect data, identify process violations, and create government revenue.

Your book’s provocative thesis is that regulation itself (or misguided or misapplied regulation as it were) has caused financial crisis. Explain that.

Congress seems to believe that the more regulation, the safer the system is. It is the redundancy and lack of what I call “smart regulation” through the enactment of law after law that is creating the context for financial crises to grow. The problem is that there was very little research and analysis of the role that government policy has played in creating or facilitating financial crises. That is partly why I wrote my book, “200 Years of American Financial Panics.” Most books and papers focus on bankers, market speculation and “robber barons.” While those are indeed factors in every crisis, they are often enflamed or enabled by government policies such as protective tariffs, housing incentives, rate controls, and segmented oversight. Why is it that the United States has the most comprehensive regulatory system, the most powerful central bank, but the greatest number of financial disasters of every industrialized country in the world but one? We are doing something wrong. Consider Canada, which has a more scaled down, streamlined regulatory system, only a handful of big banks, but has had only two financial disasters in the last two centuries to the United States’ ten.

What can be done to reform the morass of financial regulation and duplicative agencies so that they actually achieve their purported goals?

Vartanian: I propose is a multi-step reformation of financial regulation to improve its effectiveness, efficiency, and ability to protect consumers and markets. Every step is critical.  Fundamentally, we need to reduce the impact of partisan politics on our economics if we really want the system to work better. That means we should:

2.                  Remove bank supervision from the FRB and the FDIC, leaving them with receivership and monetary control responsibilities respectively.

3.                  Reform the dual system of regulation and harmonize state and federal oversight to eliminate redundancies and intramural squabbles in financial regulation.

4.                  Revamp the political side of the ledger to merge the Senate and House Committees to form a non-partisan committee with a highly paid professional staff.

5.                  Increase the compensation of financial regulators to market rates so ensure the highest quality personnel are hired and maintained.

Enhance regulatory resources with the most sophisticated forms of technology to supervise on a real-time and more predictive basis.

If we can achieve some facsimile of these steps, we will build a better regulatory structure which will save trillions just by avoiding or reducing the impact of future financial crises.

Who will be the drivers of the needed reforms?

Smart players in the market should understand that without a better and more modern form of financial regulation, everyone loses. If we don’t realize this, countries like China certainly do. The private sector must be the driver of any financial reform – that is the only way that it will get the attention of Congress. And while everyone’s investment in the status quo is a powerful force of inertia, the overwhelming impact that technology is having on financial services and the security of our money is the key driver that should wake everyone up.

Fintech companies, artificial intelligence, cloud and quantum computing, blockchain applications, non-sciences, and synthetic biology are dramatically changing the nature of financial products and how they are delivered. They will also impact the safety and security of everyone’s money if we do not change the risk/reward ratio by keying the rewards for technological innovation to the production of better software, hardware, networks, and enforcement of cyberspace insecurity.