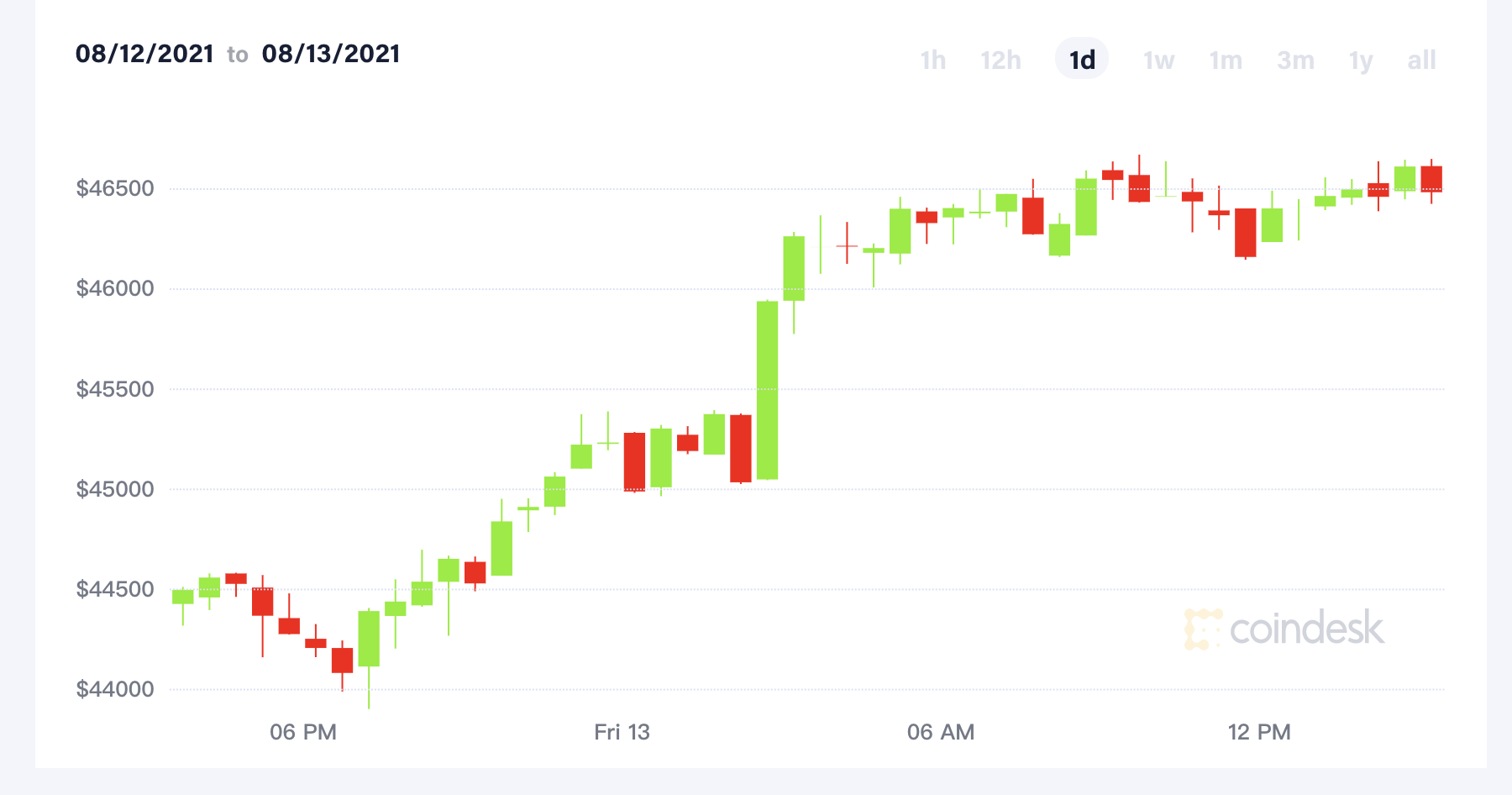 The largest cryptocurrency by market value was trading close to its highest level in more than two months, sitting on a 60% year-to-date gain after rallying from a low around $29,000 as recently as June.

“The 200-day moving average is pivotal in the day trader’s mind,” Matt Blom, head of trading for the digital-asset firm Eqonex, wrote in his daily newsletter. “A deeper dip to $40,900 will signal that the market is shaping up to form a new trading range, with $41,000 and $46,000 as the key levels.”

In an interview this week, Blom said the $50,000 price level may prove more difficult for bitcoin to break through than when the cryptocurrency soared past that level earlier this year en route to the all-time high price close to $65,000.

That’s partly because some long-time bitcoin investors who missed the opportunity to take profits during that early-2021 rally might choose to do so once the key psychological hurdle of $50,000 is reached, Blom predicts. Such selling might “limit the upside for several weeks,” Blom said.

“As soon as we get to $50K, I think we’re going to churn,” Blom said. “People are going to take some coins off. I don’t care how much of a HODLer you are.” In crypto-trading jargon, a HODLer is an investor who buys tokens under a plan to hold them for a long time.

Cardano (ADA) jumped past $2 for the first time in nearly three months as the blockchain’s chief developer announced a September release date for the planned “Alonzo” upgrade – a move that would usher in smart-contract functionality and thus address what critics have described as one of the network’s most glaring deficiencies.

The ADA price reached $2.08 at 9:05 UTC Friday, the highest since mid-May, when ADA was trading at $2.31 at its all-time high. Over the past 24 hours it’s up 16%. The recent price rally has pushed cardano’s market capitalization to about $65 billion, vying with binance coin (BNB) and tether (USDT) for the No. 3 rank among all cryptocurrencies by market value after No. 1 bitcoin and No. 2 ether.

Ether traders are acutely focused on data from the underlying Ethereum blockchain’s recent upgrade, known as the London hard fork – and the potential for the refresh to reduce the cryptocurrency’s supply growth.

Under Ethereum Improvement Proposal 1559, a component of the London upgrade that’s usually shorthanded as just EIP 1559, base fees paid to transact on the blockchain get “burned,” meaning they offset some of the 2 ETH created as miner rewards with each data block.

As of press time, some 38,261 ETH have been burned in accordance with EIP 1559, according to the website Watch the Burn. The amount represents more than $120 million, and has reduced the net issuance of new ether by an estimated 35%.

The big question is whether institutional investors who are creeping into digital-asset markets might start to see ether as an inflation-resistant asset, similar to the way many bitcoin bulls have cast that cryptocurrency.

As bitcoin has rallied 16% in August, ether has outperformed with a 26% gain. On a year-to-date basis, ether has quadrupled in price while bitcoin is up 58%.

FundStrat, the investment-research firm, wrote this week: “We expect fees moving through the platform to increase concurrent with the recent uptick in market activity and consequently should continue to see further disinflationary and perhaps even deflationary effects on Ethereum’s circulating supply, resulting in positive price performance.”

It’s notable that Mike McGlone, the Bloomberg Intelligence analyst who won big plaudits for his (ultimately) accurate call last year that bitcoin would hit $50,000, raised the possibility in a report this week that ether might eventually challenge the larger cryptocurrency for the top spot in the rankings of digital assets by market capitalization.

Crypto insiders often refer to that imagined change in the leaderboard as the “flippening.”

“There appears little can stop the process of ethereum ‘flippening’ to take the top spot by market cap, even it takes years rather than months at current trajectories,” McGlone wrote. “Ethereum appears on an enduring path as the go-to platform for the crypto ecosystem and decentralization of finance akin to Amazon Inc. and e-commerce.”

The drama around the largest hack in decentralized finance (DeFi) history appears to be coming to an end after the attacker returned most of the stolen funds to a multisig wallet set up by Poly Network, with the exception of the $33 million worth of tether that was frozen by Tether, CoinDesk’s Muyao Shen reports.

“What crypto investors and regulators should be concerned about here is that this wasn’t a hack in the traditional sense, where someone gains unauthorised access,” wrote David Janczewski, co-founder and CEO at crypto security company Coincover in an email.

“This appears to have been an exploit, where a user runs public code to take advantage of an undiscovered security issue,” Janczewski wrote. “This type of exploit certainly won’t be the last as funds deposited into smart contracts like this are always exposed to risks associated with how those smart contracts are coded.”

Most digital assets on CoinDesk 20 ended higher on Friday. In fact everything was in the green except for dollar-linked stablecoins.