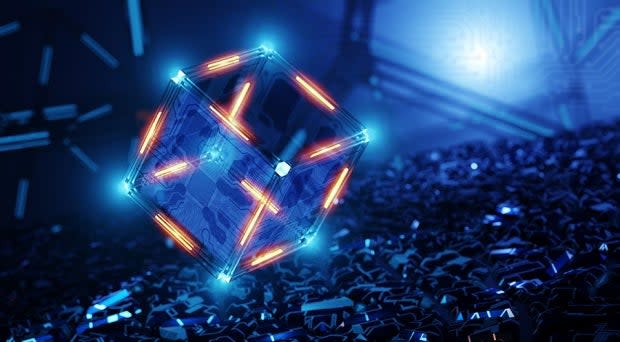 The early days of blockchain are behind us now. The “Bitcoin Mania” of late 2017 has come and gone. By now, many of you are familiar with at least the basics of cryptocurrencies, blockchain and bitcoin. Since then, a new class of crypto has emerged. The space has evolved and profits will mount up for those who take advantage. Those who don’t adapt will be left behind.

New, exciting, ten-bagger profit potential themes are all around us. Rather than just searching for bitcoin, money is being made in non-fungible tokens (NFTs) and meme-coins like Dogecoin, while DeFi (decentralized finance) has become the name of the game. How will you profit amidst this backdrop of an ever-changing landscape?

In a world where Central Banks have opened the spigots and quantitative easing has become the norm, crypto is taking on a new role. Bitcoin has seen its legitimization as an asset class. Bitcoin futures volumes have been shooting up month by month. Publicly traded companies here in the U.S. are beginning to load up bitcoin reserves on their balance sheets. Yes, you read that correctly. Companies and shareholders alike are making the conscious decision to diversify their cash holdings by adding cryptocurrency. We are not talking about a hundred bucks here or there, we are talking billions of dollars. In total, 27 publicly traded companies are holding over $9 billion in bitcoin. What happens if this becomes standard practice across all publicly traded companies? That increase in demand is likely to spark yet another surge past all-time highs.

Behind the market’s recent headlines about the Delta variant threatening reopening efforts and shortages across the supply-chain, the land grab in the blockchain world has begun. It started as a gimmick, with companies changing their names to attract new investors. Now, it has evolved to well-established industries using the blockchain technology to cut costs, improve margins and boost their bottom lines. Huge corporations like Walmart, UnitedHealth, and BMW have been adapting blockchain technology to suit their needs. And it’s more than just concepts and budding partnerships, there are real-world applications for blockchain which are already making huge changes in industries across the world. The revolution is just beginning.

A few short years ago, no one would have thought that these digital assets would be used to purchase real-world goods. Companies all over the world are now accepting crypto as payment. You can now use bitcoin to buy a Tesla or even a trip to the movies at AMC. How about a trip to the moon with Dogecoin? No, seriously, you can use Dogecoin to pay SpaceX for an upcoming space mission.

In this article, I’m going to make sure you’re not going to get hurt chasing fake blockchain companies and instead, steer you towards investment ideas which are still fundamentally sound and built around real, sustainable businesses. Legitimization was a big buzzword surrounding bitcoin. Nowadays it’s all about the Ethereum blockchain and decentralized finance. It has the power to take everyday companies and turn them into the next big thing.

Will You Profit from the Blockchain Boom?

According to experts, it’s 10 times more valuable than the internet. This “Internet of Money” is already changing the way the world does business. It’s projected to skyrocket 6,618% from $5.88 billion today to nearly $395 billion by 2028.

Now Zacks is targeting blockchain technology that drives cryptocurrencies like Bitcoin and others. The goal is to ride the growing boom without whiplash volatility from investing in the cryptos themselves.

When looking at the cryptocurrency ecosystem, you find that there are plenty of ways to invest in the blockchain. We can break down these stocks into five main categories.

1) The “Picks and Axes” and Miners

During the gold rush, the ones who really got rich were the ones selling the picks and axes. That is, the companies which provided the tools for the speculators to go out and try to find their fortunes. In the cryptocurrency world, this refers to the companies which make the chips and hardware used for mining operations. Examples would include a host of semiconductor companies.

Then there are the miners themselves. Miners confirm transactions from node to node by solving the cryptographic problem and are then rewarded in units of the cryptocurrency. Already we are seeing publicly traded companies which “mine” cryptocurrency. These companies mine the currency then immediately sell them on the open market and pass through the gains to shareholders. Think of them as you would a pipeline company in the energy sector. These companies are small now, but could become much larger in time.

No other industry has been as dependent on the cloud for its development as blockchain has. The need to distribute a ledger across the world, with no centralized ownership or authority overseeing transactions plays into the strengths of the cloud. However, the cloud is still at risk here, as blockchain technology can distribute storage across the globe, fighting the centralized nature of traditional cloud services. Still, this industry can adapt the technology to benefit.

Among the most disruptive industries for blockchain is payment processing. Rather than your traditional financial intermediary, blockchain technology allows for a distributed, open, public ledger where transactions are confirmed by other nodes in the chain for a fee that’s much smaller than your typical fees coming from more traditional processors.

Blockchain tech is also perfect for lending, allowing a lender to spread their risk across thousands of loans in an instant, no matter the size of the lender. We are just at the tip of the iceberg in this arena.

There will be a wave of companies looking for ways to incorporate blockchain technology into their existing businesses. Already, large consulting companies are beginning to offer services helping companies to integrate the new tech. Gartner has even developed a site dedicated to this purpose.

Some publicly traded companies are acting as incubators for other budding cryptocurrencies. There are currently over 6,000 cryptocurrencies in the world with a total market cap in excess of $461 billion. The total worldwide crypto market volume exceeds $110 billion daily. These investors and business development companies invest in promising crypto companies before they hit the mainstream.

It’s not just Bitcoin anymore. Ethereum has emerged as the next fully legitimized cryptocurrency. It is only a matter of time before the SEC finally gives in and allows ETFs surrounding these products to be traded. Already, futures contracts for each are traded thousands of times on large exchanges in the U.S. including the widely respected CME Group. Recently, EU regulators approved a French bitcoin ETF. One day, cryptocurrency contracts and ETF will become as ubiquitous as foreign exchange.

Blockchain has already started to impact almost every industry you can think of, and that impact will only accelerate over time. In fact, experts predict the space will soar +6,618% to $395 billion by 2028.

Just like the early days of the internet, some stocks stand to make monster gains. Others will be a flash in the pan. That’s why I invite you to look into our portfolio service Blockchain Innovators.

We cut through the gimmicks and hype to uncover strong, often little-known companies driving blockchain technology.

We’re aiming for explosive profit potential and long-term sustained growth. As of this writing, five of our open positions have already generated triple-digit returns (and one has seen quadruple-digit returns), including gains of +431%, +368%, and even an amazing +1,164%!¹

With more and more companies finding ways to use blockchain technology, now is an ideal time to capitalize on this surging industry.

When you look into Blockchain Innovators, you’re also invited to download our newly-released Special Report, 5 Hottest IPOs to Watch in 2021. Our experts unveil essential insights into 5 companies that could potentially provide triple digit gains after going public. You could be one of the first to see these little-known picks absolutely free.

This opportunity ends Sunday, August 15, so I suggest that you look into it right away.

¹ As of 8/9/2021. The results listed above are not (or may not be) representative of the performance of all selections made by Zacks Investment Research’s newsletter editors and may represent the partial close of a position.

Want the latest recommendations from Zacks Investment Research? Today, you can download 7 Best Stocks for the Next 30 Days. Click to get this free report

Blockchain is only a game changer if players are stakeholders – VentureBeat