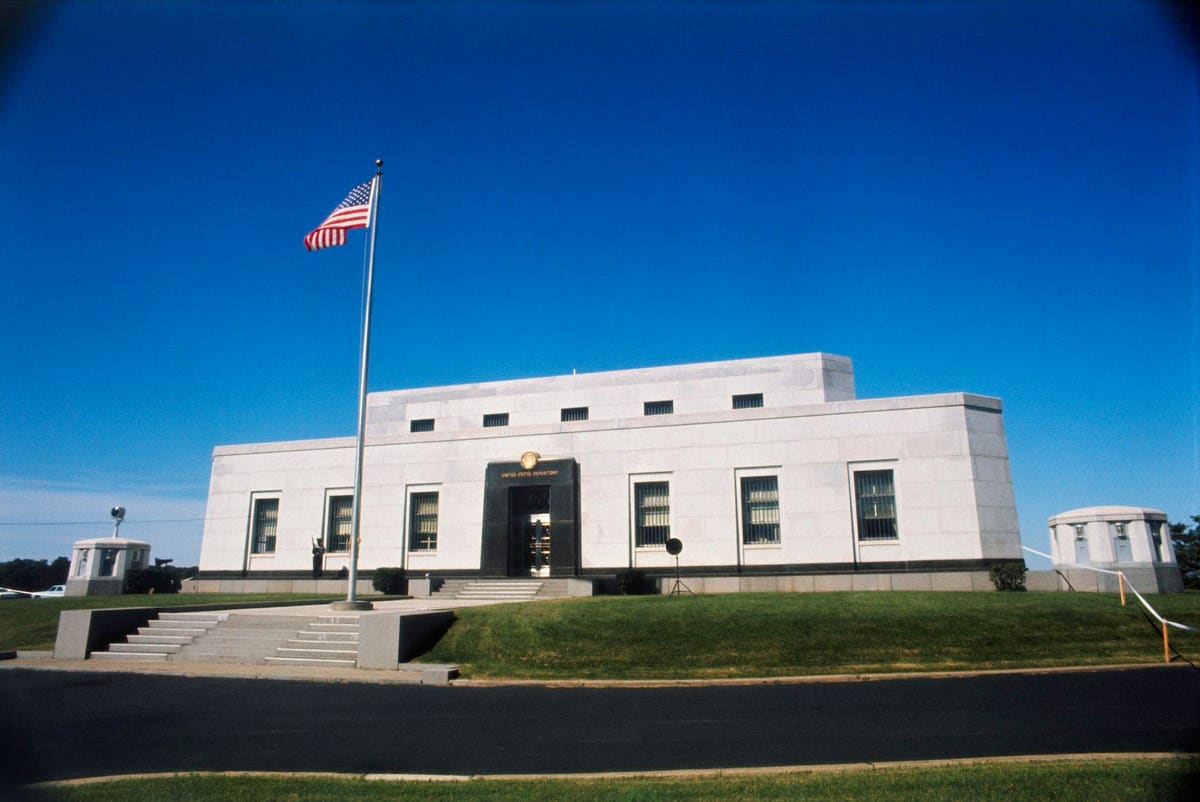 This story is about value, or the difficulty of measuring and finding true value. The total size of the US gold holdings is 261 million fine troy ounces. The size of the holdings in Fort Knox is 147.43 million troy ounces. At the current market price, this should be worth about $470 billion (give or take a couple of billion), the Treasury marks the gold at $11.1 billion (the 11.1 billion includes silver). The “statutory price” for gold is set at $42.22 per fine troy ounce, the same price it was in 1971 when the dollar came off the gold standard. The real price of gold in the open market is $1750 per troy ounce. This is about 40 times more than the marked value. The heading is based on the value of $11 billion placed on the gold holdings of the treasury, which is why it says 1% of the bitcoin supply at current bitcoin prices.

To revert to the gold standard, the paucity of gold is the one true hurdle, there are many other reasons for the impracticality of creating an exogenous standard to which a country is beholden. One of the biggest, is the drag gold exerts on the issuance of new money in times of crisis or stress. The great depression can be said to be caused partially because of the gold standard. This is not the story you hear from the gold bugs, for them gold is supreme. One of the least utilitarian materials in the world, namely gold, has great value by custom. This formed one of the greatest mysteries of value for monetary philosophers such as Adam Smith. Why is water or air that is necessary for life worth less than gold? The explanation is scarcity. Scarcity is the main driver of value for gold and bitcoin. Scarcity is also context dependent, in a desert, where water is scarce, no amount of gold nor bitcoin can buy water in extremis.

No nation in the world is currently tied to the gold standard. Throughout history, money has had many forms, from cowries to potsherds. Some of the more successful started with a currency fully backed by gold. First by striking the coins with gold. Over the years, many schemes and human ingenuity played roles in literally chipping away, at this standard.  Bi-metallism set up in the young American republic caused so many problems, because of differences in purity of gold, because of arbitrage between silver and gold prices at various points, causing breakdowns, including the unavailability of money to conduct transactions, leading to the printing of banknotes.

There are two main concepts about value, one which determines value by summing the cost of labor expended, land, machines and other resources used to produce goods or services, an objective, supply side view. Another is a demand side concept, value is determined by the utility to the buyer and hence by the market, this is a subjective view. These concepts, especially when either is used to solely determine value, create market failures. Market failures have ripple effects causing economic and social suffering.

True and deep value seems to be linked to the harvesting and not mining. Harvesting or the creation of value from renewable sources is true creation of value, mining or the extraction of non-renewable resources, leads to a dead end in the long run. For certain metals and other raw materials, there is no choice. Even here, recycling of metals seem to pull mining in the direction of harvesting. It is also possible for mining to masquerade as harvesting, intense monoculture based agriculture, normally an activity associated with harvesting, can drain aquifers to cause irreversible desertification, a mining like after-effect. Irreversible harmful change is often the after-effect of uncontrolled mining.

An exogenous peg like gold makes for discipline and austerity according to its proponents, however Robert Triffin who argued against the peg in the early 60s exposed the dilemma, a safe asset like the US Dollar was in high demand across the world, it still is today. Any constraint with the availability of such an asset would cause world stagnation, the opposite of inflation and a more dangerous wasting disease for the economy. The other horn of the dilemma was the Bretton Woods gold peg. As gold was in short supply, a strictly pegged dollar would be also supply constrained, behaving more like a mined resource. The tie was broken by releasing the dollar from the gold standard, about 10 years after the release of Triffin’s paper, in 1971. Most of the nuances, such as these, are lost in the argument for scarcity as a desirable property for a currency.