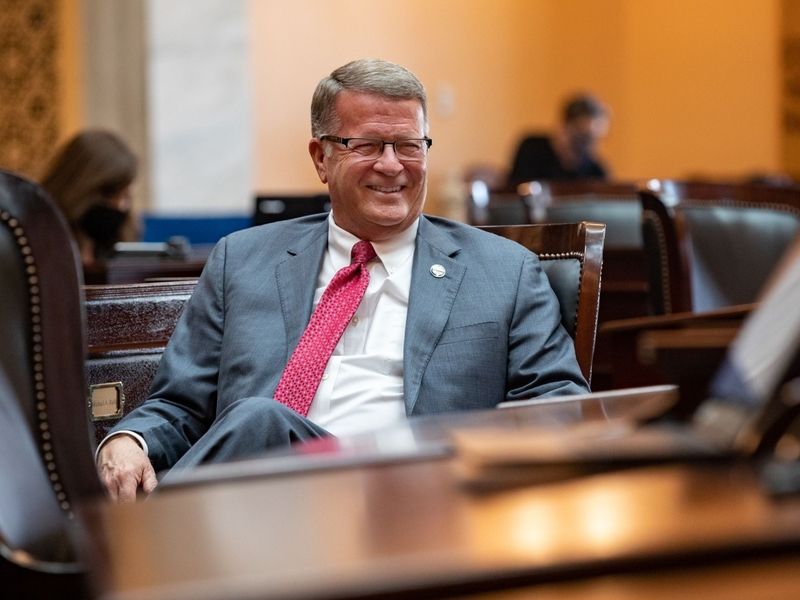 State Sen. Steve Wilson, who chairs the Ohio Senate’s Financial Institutions and Technology Committee, wants to get the state government out of the way of innovation, and he thinks two bills in hearings this month at the state legislature could help make that happen.

The Republican from Maineville is the primary sponsor of one of the bills, Senate Bill 249, which if passed would create what is known as a “regulatory sandbox” for financial products and services.

Wilson, who worked in the banking industry, said he wants to find ways to encourage both the private and government sectors in Ohio to more fully embrace emerging technology.

“The whole idea is that (this bill) gives the ability for our regulators to allow banks or any other financial services firms to develop new and innovative products,” he said.

Part of the motivation, Wilson said, is to take advantage of possibilities of “fintech,” a term that combines finance and technology and refers to any business that uses technology to modernize or automate financial services and processes. A fintech sandbox, he said, functions like an incubator, allowing both traditional banks and nontraditional financial firms to build and evaluate new financial products outside of state regulatory requirements that apply to traditional products.

Wilson believes that less regulatory oversight will expedite these new products by allowing them to be tested quickly. It is “hard to be innovative or to come up with new products” in highly regulated industries, he said in committee testimony on Oct. 19.

The Ohio Department of Commerce’s Division of Financial Institutions would oversee the sandbox program, which would permit a two-year pilot to test a novel product or service, during which time that fintech operation would be exempt from state laws, other than those outlined in the legislation.

That two-year time period can be shortened by commerce department officials overseeing the program, and consumers cannot be charged interest and fees that are higher than “otherwise permitted under Ohio law for a substantially similar loan product,” according to the bill’s language.

Wilson also has championed bills permitting the use of electronic signatures and notarization, a move he hopes creates a more modern and efficient way to conduct business in Ohio.

“The real motivation for me is for this technology to be developed so that the public sector can begin to be more efficient,” Wilson said.

As of March, nine states, not including Ohio, have passed or proposed similar sandbox laws, according to a report by the American Bankers Association. The sandbox bill, introduced in early October, had its first committee hearing on Oct. 19.

Wilson and his committee also heard testimony on a House bill that would “allow a governmental entity to utilize distributed ledger technology, including blockchain technology,” according to the bill’s language.

House Bill 177, introduced in early March, passed that chamber in May and had a first Senate committee hearing in early October. The bipartisan bill follows a move in 2018 that enabled the use of blockchain-secured contracts by the private sector.

With the passage of the bill, Ohio would join 21 other states that have passed blockchain legislation or have it in the works, according to Brian Ray, a Cleveland State University Cleveland-Marshall College of Law professor who deals with researching blockchain-related legal and regulatory issues.

“You are basically distributing the recording of information across multiple servers,” Ray said. “The technology creates a system that can allow multiple people to both record and access the information, and trust it, without the need for a central authority to verify.”

Ray, who from 2017 to 2020 was co-lead on the Cleveland-based Blockland initiative’s legislation subgroup, said blockchain applications also have the potential to streamline processes, reduce redundancies, increase security and ensure data integrity for a number of public and private industries.

“The application can be used to create a more efficient and reliable verification of critical government records, including things like land titles, vehicle registries, business licenses, birth and death certificates, and proof of insurance,” Ray said.

Blockchain often is associated with the more controversial cryptocurrencies, which are not permitted as payment by the state. Ray said there remains a good deal of confusion about blockchain and its applications, and HB 177 could go a long way toward offering greater clarity and paving the way for more innovation.

“It gets that conversation going,” said Ray, who testified as a proponent of the bill in the House. “It gives some cover to the entrepreneurial people within state leadership, and in the various agencies, who are already looking into the application by private companies that are already using the technology.”

The passage of the bill would be a significant next step to modernizing public services and in creating public-private collaborations using technology, he added.

“It would be really nice if Ohio created a commission and took on a more sustained look at where the opportunities are, both in the private and public sector” for blockchain technology, Ray said.

One supporter of the bill is MetroHealth president and CEO Akram Boutros, who submitted testimony in the Senate arguing that blockchain and distributed ledger technology have “great potential across health care to improve patient care and reduce costs.”

“It will provide nearly costless verification and distribution,” Boutros said in his statement. “Today, this process involves a costly settlement and reconciliation process of paper, manual data entry and validation.”

The answer to the first question is still up for debate. There are many different solutions being proposed, but no...

The 118th Congress has reached a milestone of seeing 50 bills and resolutions that have been introduced so far which...

Hello and welcome back to the Chain Reaction podcast, where we unpack and explain the latest crypto news, drama and trends, breaking...

For cryptocurrency investors who experienced their first bout of crypto panic in recent weeks — witnessing not only big bitcoin...

Proof of work protocols have been applied in cryptography and security literature to a variety of settings, but its most...