What Is the Ultimate Future for Bitcoin? – Motley Fool 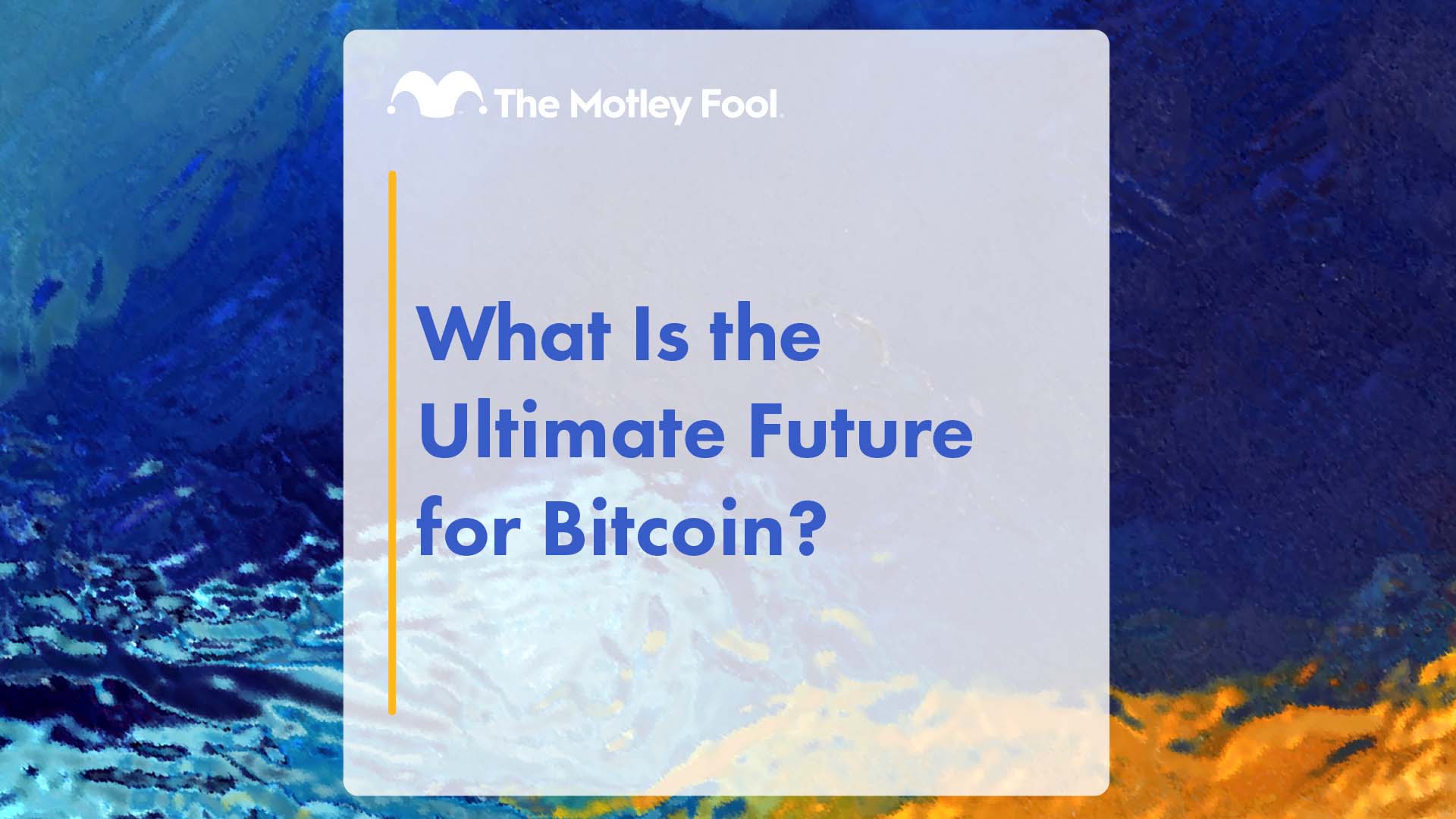 Bitcoin (CRYPTO:BTC) has been an amazing investment. Its price has gone up 20-fold since 2018. Now a single coin will run you about $63,000. Bitcoin has become a new asset class. El Salvador now recognizes Bitcoin as a currency.

What does the future hold for this top dog in the cryptocurrency market? On this episode of “The 5,” Motley Fool contributors Travis Hoium, Jason Hall, and Taylor Carmichael discuss the future of Bitcoin. This segment was recorded on Oct 21.

Jason Hall: What is the ultimate future for Bitcoin?

Travis Hoium: I’ll preface this by saying, this is an area where I think we’re looking at cryptocurrency like the Internet was in 1998, 1999, where there is huge potential and we’re starting to see what that potential might look like.

Jason Hall: When nobody really knew what it was.

Travis Hoium: We may also have a crash here in the next, who knows when. That’s very possible. I want to be a little bit cautious in what I say about that. Bitcoin it seems has solidified itself as a store of value and not really a utility in the world of cryptocurrency the way that I see it right now, whether or not that holds true, like gold. Gold has been a store of value for centuries at this point for no other reason than people think it holds value. That could be the same thing with Bitcoin over the next 10 or 20 years. What I’m interested in in the cryptocurrency space though is what is the utility of cryptocurrency? That’s why one of the things that I’m looking at right now is what can we do with things like smart contracts with the Ethereum (CRYPTO:ETH) or some of the other cryptocurrencies that are out there? I think Bitcoin has really solidified itself as the brand name and the gold, if you will, of the cryptocurrency space, but I think the innovation is going to happen in some of these other cryptocurrencies. That’s where I’m trying to learn as much as I can. It’s a space that, hey, look, nobody is an expert at this point. Everybody is learning as we go, just like we were in the Internet in the ’90s. Bitcoin, I’m not really very bullish on right now. That’s a contrarian view, but I’m looking at things like Ethereum and some of the other smart cryptocurrencies, if you will, because of their utility, and I think that’s really where, just like the Internet, it’s going to be about utility long-term.

Taylor Carmichael: I do not own any. Actually, I do own crypto. I’ve earned some crypto. I’ve never bought crypto, but I’ve earned some crypto playing the game Splinterlands (CRYPTO:SPS). If you want free crypto, Google me if you want, and Splinterlands. I played that game with game $10, and now I have cards, last time I checked, they were worth $12,000 and it’s just free. That’s fun. But to get on the subject of Bitcoin, I don’t understand cryptocurrency. I researched it, I dug into it, I can’t figure out why there’s one more valuable than the other. I’ve been scared to buy any coins, so I haven’t bought any coins. But I’m becoming more and more bullish on the industry as a whole. I think crypto is here to stay, I don’t think it’s going anywhere. I think Bitcoin is a bit like AOL. It’s the number one, it’s the early one, it’s an early mover. As we all know, AOL was a great stock forever. It made the Motley Fool what it is, it was one of the first big stocks for the Motley Fool. But eventually it’s acquired by Time Warner and it was different than Amazon (NASDAQ:AMZN).

Jason Hall: When the Fool started off, literally on AOL, it was on AOL.

Taylor Carmichael: Yeah. I think that’s how I found The Motley Fool, was just coming in on AOL. I think Bitcoin is going to be a very good investment for a long time, but it’s what you are saying, Travis, there might be issues with it long term. It could go up way, way, up, but it might not be the ultimate winner. Like Yahoo was not the ultimate winner. It was a good start for a long time, but then Google just killed it. Sometimes technology shifts like that. It is the top dog, it is the first-mover. The reason Bitcoin in particular jumped, it went from $10,000 to $60,000, I think, Square (NYSE:SQ) announced that they were buying Bitcoin, and I know Jack Dorsey is a Bitcoin bull. He says that he thinks that Bitcoin is going to replace the dollar, the euro, the yen. That’s beyond bullish. Whereas Warren Buffett calls it rat poison squared. He says that about all crypto, so it’s fascinating. I think when he says “rat poison squared,” it’s a dig at Square. [LAUGHTER] I love Square. I think Dorsey is a genius. I haven’t bought Bitcoin, but I’m buying the picks and shovels. I have been talking about Silvergate Capital (NYSE:SI), my favorite stock in this space, ticker SI. But for Bitcoin specifically, I’m watching from the sidelines. I know a lot of Fools own it, and I think I’m going to miss out, but I’m watching from the sidelines. But I would definitely pay attention to the whole crypto space because it’s a very important space. I think crypto is like the Internet 20 years ago. It’s the same dynamic.

Jason Hall: Yeah. Travis, you bought up some good points right about the utility case. You think about Ethereum and it’s blockchain network, it’s more capable out-of-the-box, so to speak. But there are things happening. You’ve got the Lightning Network, you have Stacks. There are these things that are happening that developers are working on that are starting to add more. Like the Lightning Network. El Salvador being able to use it as a currency exists because of Lightning Network, the ability to increase the number of transactions, drive transaction costs down, make it a little greener, and then you’ve got Stacks, this adjacent network rights for developers to build. You think about smart contracts and some of that stuff, it’s coming along. There’s a lot of innovation that’s happening that I think is going to help keep Bitcoin relevant, right? I think that’s really important. I think you think about that 21 million number, it’s a limited number of tokens that will ever exist. For people that are looking for a store of value, I think that’s it. I think there’s going to be enough other stuff that keeps it relevant and functional, that keeps developers using it, and other use cases that make it functional, and then that gold comparison. Gold is like a $9 trillion dollar asset, Bitcoin is like $1.3 trillion roughly. 20 years from now, I think Bitcoin is going to be bigger than gold, I really do. Two-thirds of gold’s value is people that trade gold and hold it as some hedge or some investment, not as utility value, not it’s commercial value, it’s investment value. It’s people that are holding it as an investment. I think that’s going to be the same case for Bitcoin, because there’s a lot of things that are even better versus gold. Most Gold is held, people hold it digitally. They make an investment in a trust that has gold somewhere in a big storage facility, and you pay a percentage of assets to do it. With Bitcoin, the cost structure should over time improve. I think it’s going to be around for a long time, and I think it could easily 6x from here, 7x from here. I really think it may take 10 or 20 years to do it, but I think it really could. I’m not making a big investment in it, I have a small stake, I’m going to build it out over time.

10 stocks we like better than Bitcoin
When our award-winning analyst team has a stock tip, it can pay to listen. After all, the newsletter they have run for over a decade, Motley Fool Stock Advisor, has tripled the market.*

They just revealed what they believe are the ten best stocks for investors to buy right now… and Bitcoin wasn’t one of them! That’s right — they think these 10 stocks are even better buys.