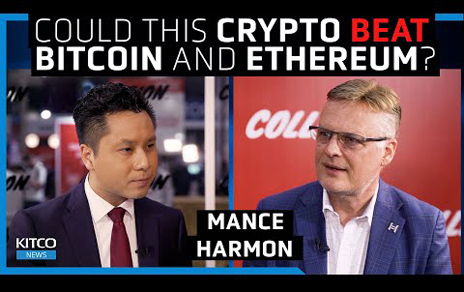 (Kitco News) – Bitcoin and Ethereum are “extremely inefficient,” and Hedera’s Hashgraph is much more efficient and environmentally friendly, said Mance Harmon, Co-Founder of Hedera and Co-CEO of Swirlds Labs.

“Hedera… uses this algorithm called ‘hash’ that is the most efficient algorithm in the market,” he explained. “When it comes to Ethereum, even Ethereum 2.0, Hedera is 14,000 times more efficient, or uses that much less energy than Ethereum 2.0.”
Harmon spoke with David Lin, Anchor and Producer at Kitco News, at the Collision Conference in Toronto.

Hashgraph is a distributed ledger technology which is an alternative to blockchain. Hedera holds the patent to this technology, which Hedera claims is faster, less costly, and more energy efficient than blockchains like Bitcoin’s and Ethereum’s. Hashgraph is proof-of-stake.

“It’s impossible to know how much it’s going to cost to use the [Ethereum] network, because of the fluctuation in the token price,” said Harmon.

According to Hedera’s website, the average fee for a Bitcoin or Ethereum transaction is $22.57 and $19.55, respectively. Hedera’s HBAR cryptocurrency, on the other hand, has a transaction fee of $0.0001.

“HBAR is used both to secure the network, and to make it possible for developers to use the network,” Harmon explained. “When a developer builds an application on top of HBAR, in order to use our network for their application, they have to buy HBAR off the open market, through the exchanges. When they make API calls, they pay for those using HBAR.”

The recent crypto selloffs have affected HBAR, which is down more than 50 percent year-to-date. However, Harmon is not concerned by the market fluctuations, and said that HBAR is secure.

“Ultimately what you have to be concerned with is whether or not a single bad actor, or group of bad actors working together, can buy up at least a third of the total token supply,” he said. “If they can, then they can influence the network… In our case, we have this governing council, these 26 global enterprises each running a node in the network, and there aren’t anonymous nodes, so we’re not susceptible to those types of attacks today.”

These 26 enterprises, which include corporations like Boeing and Google, as well as universities like UCL and the London School of Economics, run so-called ‘Consensus Nodes’ on the Hedera network. These nodes store the public ledger’s latest state, receive transactions, and work together to determine consensus using hashgraph.

To find out the applications of Hedera’s Hashgraph, and Hedera’s future plans, watch the above video.

Coinbase Betting Big On Staking Ahead of Ethereum Merge – Decrypt

Coinbase Betting Big On Staking Ahead of Ethereum Merge  Decrypt